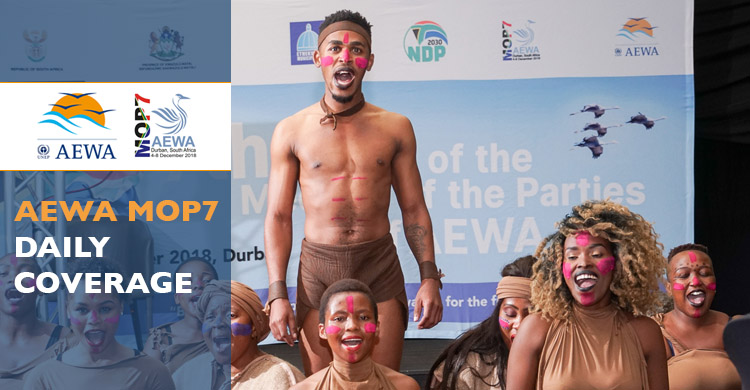 Durban, 8 December 2018 - On the fourth day of AEWA MOP7 in Durban (Friday, 7 December 2018), delegates enjoyed a day of excursions offered by the host country to a number of exciting destinations located in and around the city of Durban. In the evening following the excursions, delegates were invited to a special Gala Dinner hosted by the Province of Kwazulu-Natal (KZN), which took place in the Moses Mabhida Stadium in Durban.

The host government offered delegates a choice of four half-day and full-day excursions from which they could choose, ranging from a tour of historical and cultural sites in Durban to three wildlife field trips to various locations near the city.
The majority of delegates took part in the “Inanda Heritage Route and Kwamuhle Museum” tour which took them through the Inanda Valley to a number of important historical sites of significance to recent South African history with connections to both Mahatma Gandhi and Nelson Mandela.  During the tour delegates visited the Kwamuhle Museum, which provided an overview of the city’s history, and the Phoenix Settlement established by Mahatma Gandhi, where delegates could see his house as well as the international printing press he established. The tour also included visits to the Ohlange Institute, where Nelson Mandala cast his first vote in the 1994 elections as well as a visit to Inanda Seminary, the first secondary school for African girls.
The other three excursions offered by the host country, were field trips to the Durban Bay, the Dlinza Forest and the SAPPI Stranger Bird Hide.
The “Durban Bay” tour included a guided boat tour as well as the chance for delegates to participate in the monthly waterbird count being organized by the Durban Natural Science Museum. Durban Bay is an area of rich avian diversity as well as the location of one of Africa’s busiest commercial ports. Despite its proximity to a major urban and industrial centre, the Bayhead Natural Heritage Site with its estuarine tidal flats is home to 120 aquatic bird species and forms part of the broader Durban Bay area.
The second field excursion took delegates to “Dlinza Forest”, which is classified as an Eastern Coastal Scarp Forest. From a biodiversity perspective, it is considered one of the most important forest types in South Africa and is a regular breeding site for the Spotted Ground Thrush and Eastern Bronze-naped Pigeon and is also home to the Chorister Robin-Chat and Black-bellied Starling.
The third field excursion took delegates to the “SAPPI Stanger Bird Hide”, which is located 70km north of Durban and overlooks a settling pond covered by reeds and water hyacinth, which attracts a wide range of waterfowl, including Goliath Heron, Baillon's Crake, Black Crake, Greater Painted-snipe, Yellow Wagtail (in summer), Little Rush-Warbler, Lesser Swamp-Warbler, Sedge Warbler, African Marsh-Harrier, Southern Brown-throated Weaver, and Black-throated Wattle-eye.
In the evening, delegates attended a special Gala Dinner hosted by the Province of Kwazulu-Natal (KZN) at the Moses Mabhida Stadium in Durban, where they witnessed an African dance performance by the Dim-Dep Musical Group and heard short addresses by Mr Ravi Pillay, KZN MEC for Human Settlements and Public Works and Mr Barney Kgope, Acting Chief Director for Biodiversity and Conservation at the South African Department of Environmental Affairs, as well as from AEWA Executive Secretary, Jacques Trouvilliez.  At the associated Champions Awards Ceremony, Norway and the European Union were recognized as “Champions” of waterbird conservation, for their support of the European Goose Management Programme (EGMP) and the AEWA African Initiative respectively.
For more information please see:
• Press Release: European Commission and Norway: Champions of Waterbird Conservation (Published: 7 December 2018)
• AEWA MOP7 Excursion Programme for Delegates (PDF Document)