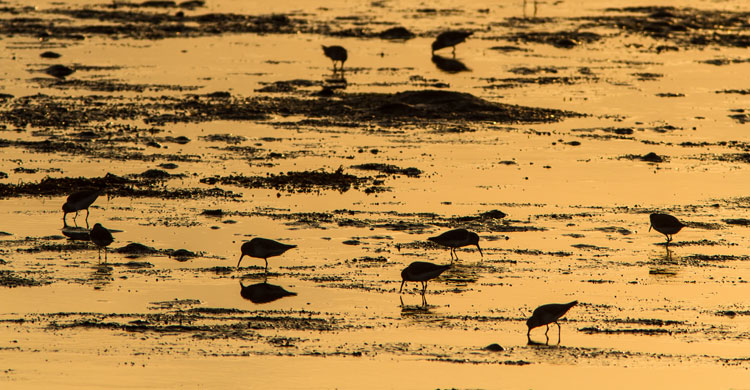 Bonn/Wilhelmshaven, 26 August 2016 – To mark Wadden Sea Day 2016 a special event was held yesterday, focusing on the great importance of the area as a staging post for the millions of birds that seek food and shelter there during their migration along the East Atlantic Flyway.

So vital is the Wadden Sea to the survival of migratory birds that when it was placed on the World Heritage List in 2009 (extended in 2014), UNESCO called upon the Wadden Sea States to strengthen their cooperation with other countries on the African-Eurasian Flyways. These include the East Atlantic Flyway, a bird migration system linking breeding and wintering grounds as diverse as the Arctic tundra and the Banc d’Arguin in Mauritania and stretching from northern Russia to southern Africa.

“The designation of the Wadden Sea as a World Heritage Site was made - among other things - because of the area’s importance as a staging, moulting and wintering site for millions of migratory waterbirds, and through its decision UNESCO clearly recognized the flyway dimension of migratory bird conservation,” said Jacques Trouvilliez, Executive Secretary of AEWA.

Over 6 million birds can be present in the Wadden Sea at the same time and an average 10-12 million pass through it each year.  As the world’s largest unbroken system of intertidal sand and mudflats, the area is an absolutely critical stopover site in a network of other key sites for migratory birds which use the East Atlantic Flyway.

"The World Heritage Status has not only been beneficial for the region and has helped increase the recognition of the sites’ importance internationally, it has also been a stimulus for enhancing cooperation for the conservation of migratory waterbirds in the Wadden Sea and beyond.  However, these flyway conservation efforts need to be significantly increased if we want to halt the worrying decline of migratory bird species passing through the Wadden Sea," said Trouvilliez.

This year the question was posed whether the Wadden Sea – a branch of the North Sea shared by Denmark, Germany and the Netherlands - is still a reliable hub for migratory birds, thirty years after the creation of the National Park in the Lower Saxon sector of the 10,000 km2 intertidal zone. 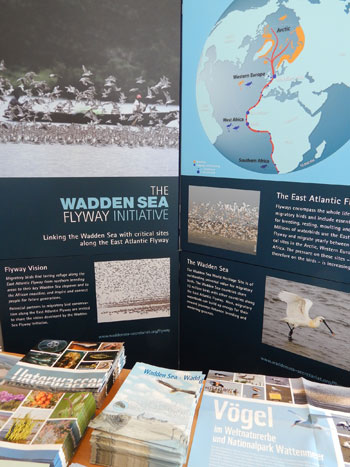 As a response to the UNESCO request for enhanced cooperation along the East Atlantic Flyway, the Trilateral Wadden Sea Cooperation established the Wadden Sea Flyway Initiative (WSFI), to supplement longer-standing programmes such as the Joint Monitoring of Migratory Birds and the Trilateral Monitoring and Assessment Programme.

“Despite all the conservation measures taken by Denmark, Germany and the Netherlands, these monitoring programmes have identified alarming declining trends in the number of migratory birds frequenting the Wadden Sea each year,” said Rüdiger Strempel, Head of the Common Wadden Sea Secretariat.

The WSFI aims at operationalizing the joint responsibility of the Wadden Sea States towards international cooperation for the conservation of migratory waterbirds that use the East Atlantic Flyway.

The Initiative has so far worked with national governmental and non-governmental partners involved in waterbird conservation along the East Atlantic Flyway, with a focus on promoting and supporting monitoring and capacity-building.  It has also fostered close collaboration with a number of other initiatives and projects of partner organizations working along the flyway, including AEWA, BirdLife International and Wetlands International.

“At the time of the first Wadden Sea Day held ten years ago, there had already been a noticeable drop in bird numbers. Now, ten years on, the decline has not been halted, so we have once again brought noted experts from around and beyond the Wadden Sea region together to discuss the issue and suggest possible ways to turn things round,” said Strempel.

Speakers at the seminar drawn from policy-makers, conservation managers, scientists and NGO representatives included Peter Südbeck, Director of the National Park Administration Wadden Sea Lower Saxony, Franz Bairlein of the Institute of Avian Research,Professor Theunis Piersma of the University of Groningen and Royal Netherlands Institute for Sea Research and Melissa Lewis, a member of the AEWA Technical Committee specializing in environmental law.

In her presentation given at the event, Ms Lewis described the role of a wide range of legal instruments for conservation along the East Atlantic Flyway from bilateral arrangements covering parts of the Arctic through AEWA which covers the whole of Africa and Europe, the Middle East and the Canadian Archipelago to global instruments such as the Ramsar and the World Heritage Conventions.

She also underlined that AEWA and the coalition of partners with which it works have a unique niche in promoting the flyway approach and play a crucial role in facilitating international species action plans and national implementation through the AEWA African Initiative.

Melissa said “Although a myriad of bilateral, regional and global instruments contribute to bird conservation along the East Atlantic Flyway, AEWA stands out as a result of its unqualified legal commitments to the flyway approach and the various mechanisms it has developed to support the implementation of this approach in practice. The Agreement therefore provides an essential intergovernmental framework for coordinating conservation measures across the East Atlantic Flyway, supporting the work of the Wadden Sea Flyway Initiative - the activities of which have been closely aligned with AEWA's Plan of Action for Africa.”

The special event took place at the UNESCO World Heritage Wadden Sea Visitor Centre in Wilhelmshaven and was hosted jointly by the National Park Administration of Lower Saxony and the Common Wadden Sea Secretariat.

Further information about the event can be found at the Common Wadden Sea Secretariat's website.