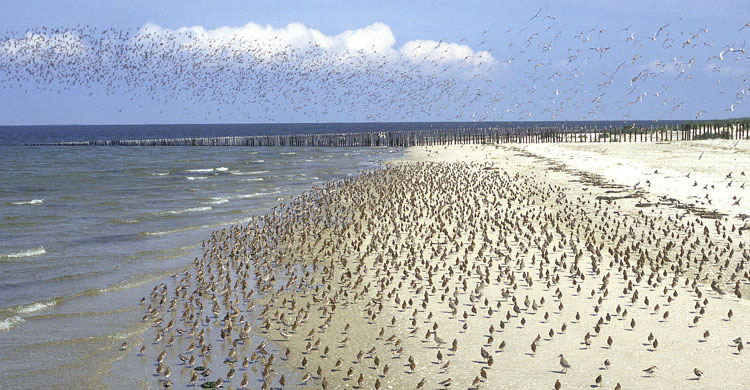 The 39th Session of the World Heritage Committee is meeting in Bonn, a stone’s throw from the headquarters of the Convention on Migratory Species and several of its associated agreements.  Jacques Trouvilliez, Executive Secretary of the Agreement on the Conservation of African-Eurasian Migratory Waterbirds (AEWA), and Rüdiger Strempel, Secretary of the Common Wadden Sea Secretariat, examine the importance of those sites inscribed in the list for their natural rather than cultural qualities.

Mention UNESCO’s World Heritage sites and what tends to spring to mind are medieval cities, palaces, cathedrals, temples and other ancient monuments.  But while the majority of the 1,007 sites on UNESCO’s list belong to the world’s cultural heritage, nearly 200 have been included in whole or in part because of their natural value.

Among the natural sites is the Wadden Sea which straddles the borders of the Netherlands, Germany and Denmark, 11,000 km2 of vast coastal wetland that is home to thousands of harbour seals and provides essential resources for millions of migratory waterbirds.  For migratory birds the Wadden Sea is a stop-over to build up energy for their journey between their breeding grounds in the Arctic and wintering sites in Africa. So unlike most of the cultural sites which often represent a particular, unique characteristic, natural sites that share migratory species, are dependent on each other.  To underline this interdependence, the Wadden Sea and the Banc d’Arguin in Mauretania have entered a formal partnership because of their ecological connection both being part of the Eastern Atlantic Flyway. Despite being thousands of kilometres apart on different continents the two sites are inextricably linked, hosting as they do, not just the same species, but actually the very same birds - just at different stages in their yearly migration.

While the Wadden Sea has had the benefit of close cooperation between the authorities of the three countries involved - helping its harbour seal population reach record high levels - there is no room for complacency.  Some species – such as the Eurasian spoonbill – are recovering and seeing positive population trends in Western Europe both in the long term (25 years) and short term (10 years), but others are declining and for reasons that are far from clear.  The reasons might not lie in the Wadden Sea itself but elsewhere on the birds’ migration route and, but if this is the case, it simply serves to illustrate the importance of examining the whole range of factors along the entire length of the flyway.  One major cause for concern is that if an established, adequately funded and well managed area like the Wadden Sea is facing problems, then what are the prospects for other less fortunate World Heritage Sites?

One solution would be to extend the partnership approach by linking the breeding sites in the Arctic and other wintering grounds further south in Africa, such as the Bijagós Archipelago in Guinea Bissau, designated as a reserve under another UNESCO programme - “Man and the Biosphere” – the idea being to develop coordinated monitoring and management of the shared populations along the flyway.

The 1,000 different properties inscribed on the UNESCO list are la crème de la crème – crown jewels, so to speak, of universal value.  This is as true for the natural sites as it is for the cultural ones.  In terms of their quality and global significance, they outshine what are in comparison run-of-the-mill National Parks, nature reserves and protected areas.

But even these treasures are becoming tarnished, and UNESCO maintains a list (under Article 11.4 of the World Heritage Convention) of World Heritage in Danger, sites threatened by human activities (from war, land use change and development to simple neglect) or natural disasters.  There are currently 46 sites on this list, and the 39th session of the Committee meeting in Bonn this week will be considering adding more – there was even a proposal that Australia’s Great Barrier Reef should be included.  Previously, the Galapagos Islands, the first World Heritage Site to be designated, with its associations with Darwin and famous for its unique wildlife, were placed on the endangered list because of invasive alien species, too many tourists and other human pressures.  Cream if it is not kept properly turns sour after all.

The North Sea coastlines of Denmark, Germany and the Netherlands have long attracted holiday-makers – the UNESCO World Heritage status adds to the allure and has proven to be a useful means to promote the region as a tourist destination.  Recognition by UNESCO is also a useful means to secure support from donors – Banc d’Arguin benefits from having dedicated full-time staff, providing solid and structured management.  Working with the tourism sector has also proved fruitful – with the industry keen to strengthen its green credentials and helping to widen the audience for the Wadden Sea National Park’s conservation message.  Consideration is being given to developing a formal Action Plan to encourage sustainable tourism activities.

World Heritage Sites are worth saving for their intrinsic value.  They engender local pride.  There bear witness to human achievements and the beauty and diversity of nature.  For the philistines among us, they can also be of immense financial value – creating employment and generating revenues – much of this thankfully from the conservation point of view sustainable and non-consumptive. As, indeed, it must be, in order to safeguard the credibility of the World Heritage status.