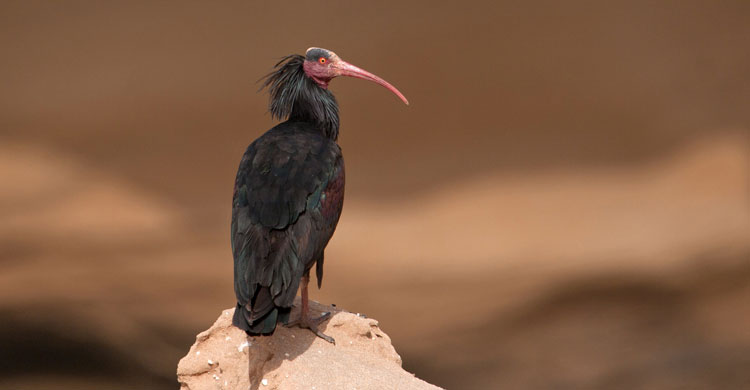 Bonn, 7 November 2016 - The first revision of the International Single Species Action Plan (ISSAP) for the Conservation of the Northern Bald Ibis (Geronticus eremita) has been published on the AEWA website as No. 55 in the AEWA Technical Series.  The revised ISSAP was adopted at the 6th Session of the Meeting of the Parties to AEWA held in November 2015 in Bonn (MOP6). It was produced by the Royal Society for the Protection of Birds, the BirdLife Partner in the United Kingdom and prepared with financial support from the Saudi Wildlife Authority (SWA) and Jazan University, Saudi Arabia.

The original ISSAP was approved by the 3rd Session of the Meeting of the Parties to AEWA in October 2005 and was based on an expert workshop held in Madrid in January 2004. The principal milestone for the elaboration of the revision was a workshop held under the auspices of the AEWA Northern Bald Ibis International Working Group (NBI IWG) which was held in Jazan, Saudi Arabia in November 2012. The first draft was presented to the NBI IWG in October 2014 and the second draft was submitted to the AEWA Technical Committee in March 2015.  A second revision is scheduled to be undertaken in 2025, although an emergency review could be done if warranted by circumstances.

The countries to which the ISSAP applies are Algeria, Eritrea, Ethiopia, Morocco, Saudi Arabia, the Syrian Arab Republic, Turkey and Yemen. The main western population occurs in Morocco and consists of 115 breeding pairs.  A relict breeding population of three pairs was discovered in the Syrian Arab Republic in 2002 but this has since dwindled and by 2013 there were no breeding pairs left.  A semi-wild population exists in Turkey. This population is growing and could provide important genetic resources for reintroduction initiatives under the guidance of the revised Action Plan and following the AEWA Guidelines on translocation of waterbirds for conservation purposes.