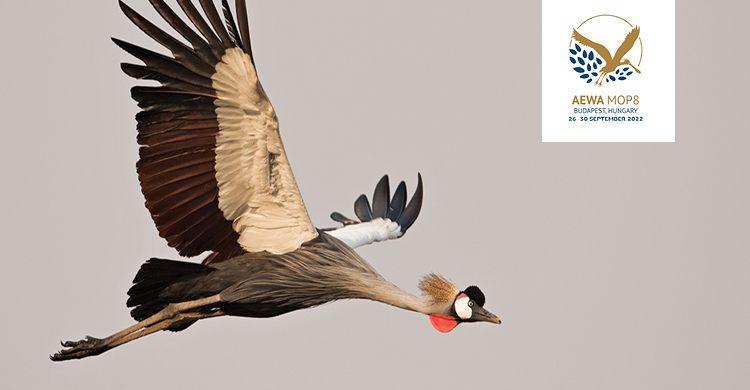 Bonn, 22 September 2022 - Grey Crowned Cranes, icons of Africa’s grasslands and savannas, are found across 15 range states in Southern and East Africa. Dependent on wetlands for breeding, Grey Crowned Cranes are found foraging in the natural wetland and grassland habitats in the catchment or in the adjoining agricultural lands. They are listed as Endangered on the IUCN Red Data List and have declined by up to 80 percent over a 25-year period. Focussing on addressing the key threats to the species, including habitat loss, disturbance by livestock and people, and the illegal captive crane trade, an International Action Plan was developed and endorsed at the 6th Meeting of the Parties of AEWA held in Bonn, Germany in 2015.

AEWA's Contracting Parties and partners including representatives of other international treaties, international and national non-governmental organizations as well as experts from the scientific community are set to meet again in Budapest, Hungary from 26-30 September 2022 to decide and act on urgent measures for the conservation of African-Eurasian migratory waterbirds such as the Grey Crowned Crane.

The official slogan of MOP8 – Strengthening Flyway Conservation in a Changing World – captures the need for AEWA Parties to use this MOP and make collective decisions to ensure stronger resources for the implementation and the delivery of the Agreement, through particularly challenging times with the pressing global issues related to climate change, biodiversity loss and shifting priorities in particular due to the impact of the COVID-19 pandemic. Strengthening flyway conservation can only materialize with sustainable funding, compliance, and increased implementation.

A changing climate, that is resulting in far more flooding and drought events, and the recent Covid pandemic, have highlighted the real need to improve the resilience of communities within the landscapes where Grey Crowned Cranes are found.  Without sustainable changes to the current agricultural practices, the increasing need for agricultural land as the human population increases and as soil fertility in the uplands decreases will result in an even greater encroachment into wetlands.  The threat to cranes is further exacerbated as human-wildlife conflict has increased because of the damage that cranes cause to crops, whether perceived or actual.  Any crop damage has now become a point of contention, and we are seeing increasing levels of poisoning and persecution of cranes across their range.  Added to all of this, we are becoming aware of the increasing threat that powerlines and associated infrastructure have on cranes and the illegal captive crane trade market that seems to be increasing once again.  The need for adaptive conservation approaches in a changing world is more evident now than ever.  Monitoring our impact too has become a key part of what is needed, ensuring that our actions are moving us toward the impact we hope to achieve! 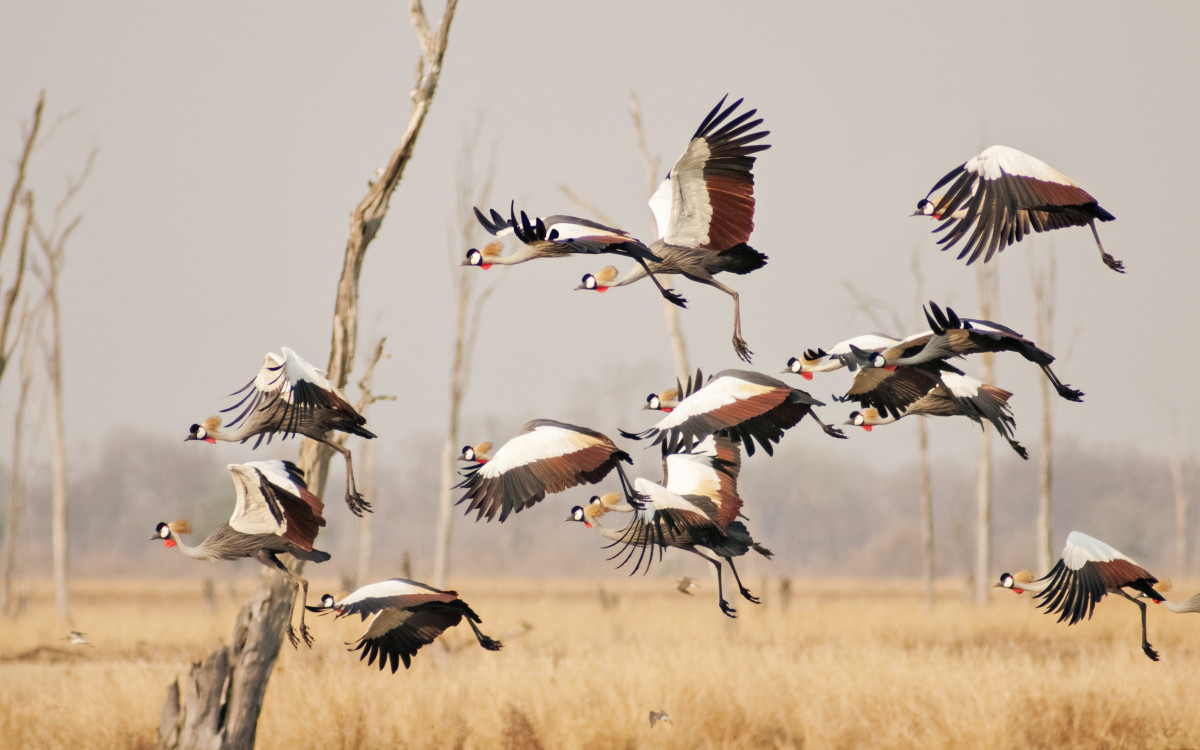 Chaired by Uganda, the AEWA Grey Crowned Crane International Working Group is coordinated by Kerryn Morrison of the International Crane Foundation (ICF) / Endangered Wildlife Trust (EWT) Co-operation and is supported by two regional coordinators: Dr Adalbert Aine-omucunguzi for East Africa and Dr Lara Jordan for Southern Africa. The first meeting of this Working Group was held in July 2019 in Entebbe, Uganda.  It was here that an implementation plan for the Action Plan was developed.  Since then, significant progress has been made over the last few years across several of the range states.  Key to this success has been the fact that Grey Crowned Cranes cross international borders and that many of the strategies applied in one area can be adapted to other areas across their distribution.  There is huge scope for more collaboration and shared learning.

To better understand cranes and to address the threats posed to them and their habitats, we have seen a significant scale-up in focus across several countries.  The International Crane Foundation (ICF)/Endangered Wildlife Trust (EWT) Cooperation has scaled up its team and efforts, and now has a significant focus on Grey Crowned Crane conservation in the Drakensberg region of South Africa, around the Kafue Flats in Zambia, around Rugezi Marsh in northern Rwanda, in southcentral and southwestern Uganda and in western Kenya.  Likewise, the Rwanda Wildlife Conservation Association (RWCA) has scaled up its efforts and besides increasing its focus on Grey Crowned Cranes across Rwanda, they have established the Umusambi Village in Kigali, Rwanda, as a crane sanctuary for cranes that cannot be released back into the wild and as an education center.  Crane Conservation Volunteers are still active around Lake Ol’bolossat in Kenya, Nature Uganda is still active in southwestern Uganda, and NABU has supported the hire of a Project Officer under Nature Tanzania, focussing on western Tanzania along the Kagera River between Tanzania and Rwanda.

Excitingly, the Uganda National Single Species Action Plan has now been fully endorsed by Uganda’s Ministry of Wildlife, Tourism and Antiquities, and the Kenya National Single Species Action Plan is in its final stage of review under the Kenya Wildlife Service.  The two plans will ensure government support for the conservation of Grey Crowned Cranes.

A lot has also been achieved from a research and monitoring perspective.  The ICF/EWT Cooperation now has baseline information for crane breeding and for population trends across each of its project sites.  The sixth annual survey in Rwanda, coordinated by RWCA is showing a steady increase in Grey Crowned Crane numbers, with 1,066 recorded in the 2022 survey (up from 487 in 2017), and the annual aerial survey by Ezemvelo KwaZulu_Natal Wildlife and the ICF/EWT Cooperation over the Drakensberg of South Africa revealed that Grey Crowned Cranes are still increasing.  A survey in Tanzania, conducted by NABU and Nature Tanzania, confirmed that very few Grey Crowned Cranes are found outside of conservation areas and that hunting and trapping are still significant threats.  BirdLife Zimbabwe conducted surveys in 2018 and 2019, confirming that there were still Grey Crowned Cranes in the Midlands, and good numbers in Matabeleland (300) and Driefontein Grasslands (115).  We also now have crane-ringing programmes in Kenya, Rwanda, and South Africa, with movements seen between Rwanda, Tanzania, and Uganda.

To better understand the powerline threat to Grey Crowned Cranes in East Africa, we have drawn on the expertise in South Africa and started training teams in Uganda to develop monitoring plans for baseline information that can be used when discussing the next steps with the power utilities in each country.  The ICF/EWT Cooperation has also initiated a project to address crop damage that is resulting in crane poisonings.  Besides awareness campaigns, 72 farms have been supported in Uganda with crane crop damage deterrent measures which we are testing for effectiveness.  We are hoping for real impact with one or more of these techniques that we can then scale up across the region.

Education and awareness campaigns and programmes have been held in key crane areas in Kenya, Rwanda, Uganda, Zambia, and Zimbabwe.  80 community-based crane conservation champions in Rwanda, 66 in Uganda, 31 in Kenya, and 33 in Zimbabwe have been trained to respond to emergencies, monitor cranes, increase awareness of cranes and their habitats and threats, and discourage harmful activities.  This strategy is showing real impact, with breeding productivity increasing wherever crane custodians/champions are in place. 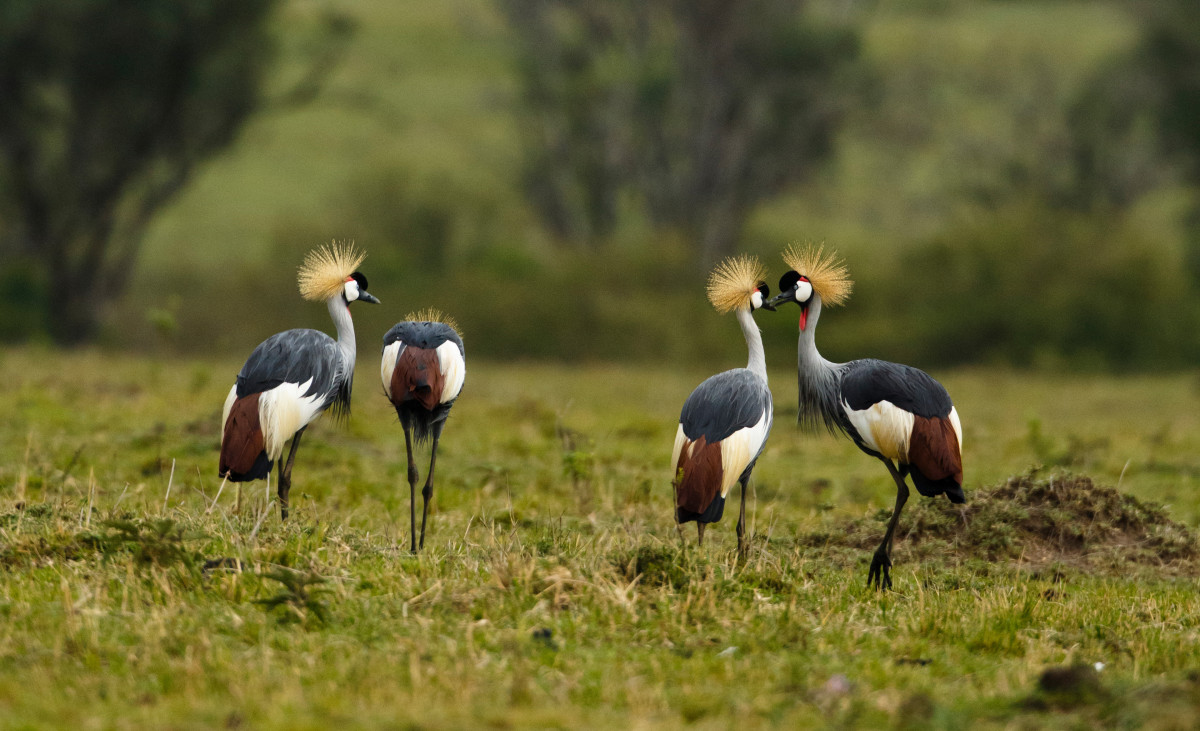 In Kenya, Rwanda, South Africa, and Uganda, a number of projects have been set up to support community livelihoods and to improve the livelihoods of people who share the same landscapes with cranes.  BirdLife Zimbabwe has established three alternative and biodiversity-friendly community livelihoods in the Driefontein Grasslands, resulting in more than 80 ha of wetland being restored. RWCA has set up Conservation Agreements with communities around Rugezi Marsh in Rwanda involving rainwater harvesting, access to fodder grass, a communal modern cow barn, and a women’s sewing cooperative.  Also at Rugezi Marsh in Rwanda, the ICF/EWT Cooperation with the Integrated Polytechnic Rwanda College – Kitabi, has planted 21 ha of non-invasive Napier Grass to reduce soil erosion and to provide fodder for livestock to prevent families from needing to harvest vegetation from the Marsh, therefore reducing disturbance to cranes.  This project has seen 16 Conservation Agreements signed with local communities and over 200 households engaged in the project.  In Kenya, the ICF/EWT Cooperation, together with Community Action for Nature Conservation and the Kipsaina Crane and Wetland Conservation Group, have planted 60,000 tree seedlings along wetland buffer zones to restore the buffer, have trained 66 people from three community groups in modern beekeeping, and have trained 30 community members in tea and tree nursery management and supplied them with 60,000 seedlings to start.  In Uganda, the ICF/EWT Cooperation signed Conservation Agreements with 248 households whereby livelihood options, such as potatoes and climbing beans were provided, including training and mentorship, in return for improved conservation action in the area.

There are two focal areas that the ICF/EWT Cooperation is piloting that hold particular potential for impacting positively on both cranes and people across their migratory range.  The first is around agroecological practices that include soil and water conservation techniques and also consider the diversity of crops within a changing and varied climate.  749 community members were trained in Uganda, and 656 farmers in Kenya.  All indications are that wetland encroachment will be reduced through this project as farmers find farming easier out of the wetlands, with improved productivity and income yields.  The second is around integrating family planning and conservation.  Partnering with the Margaret Pyke Trust, Rugarama Hospital, and the London School of Hygiene and Tropic Medicine, a project is being piloted in southwestern Uganda that integrates conservation, livelihoods, human health and reproductive health. Early indications suggest that the messaging is far stronger and impactful when integrated and reaches a much larger audience than separating these messages.

The world is changing, and conservation efforts need to keep abreast of new threats as they arise and as new opportunities become available.  Grey Crowned Cranes require a muti-faceted and multi-stakeholder approach to ensure their future.  Partnerships between government at the national and local levels, conservation NGOs, researchers, the agriculture industry, human health, energy sector, and others are all needed to move us forward in a common direction.  We are really grateful to the many donors who have supported our work on Grey Crowned Cranes to date, and for their ongoing support of our work.