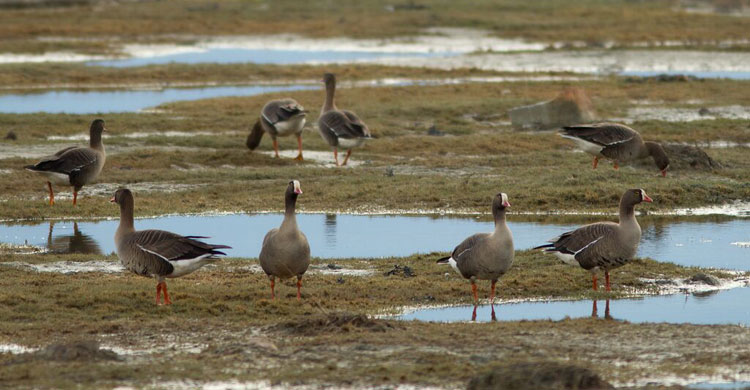 As reported by members of Birdlife Norway conducting the yearly monitoring on the main staging grounds at Porsanger Fjord in Finnmark in northern Norway, a total of 126 individuals were counted on Sunday the 23rd of August. Of these birds, 70 were identified as juveniles born this season belonging to 22 separate broods. Experts were hoping for a good breeding season based on indications that 2015 would be a year with numerous rodents, which typically leads to lower predation pressure on nests by foxes and other predators.

Regular autumn monitoring has been carried out at the Porsanger Fjord since 1994, with the highest autumn total of 128 individuals (consisting of 61 adults and 67 juveniles) recorded in 1995. Hence this year’s total count of 126 birds almost reaches the 1995 record. The number of broods and juveniles is the highest recorded since the regular autumn counts were started.

The Lesser White-fronted Goose is globally threatened and listed as Vulnerable on the IUCN Red List and as Critically Endangered within the European Union according to the 2015 European Red List Assessment. Although legally protected throughout most of its range, main threats to the species include illegal killing and accidental shooting as well as habitat loss and disturbance.

A tiny population harbouring an amazing migration, Fennoscandian Lesser White-fronted Geese migrate to autumn staging and wintering areas in Hungary and Greece after the breeding season. Unsuccessful breeders undertake a so-called moult migration to Arctic Russia, thus taking a more precarious route through Central Asia to meet up with the other birds in Eastern Europe. As a result, a successful breeding season not only gives the population a boost in juvenile numbers but also increases the survival rate of entire families as they will follow the safer and shorter route to the wintering grounds in Greece. During spring migration, the birds stop in Lithuania, Estonia and Finland on their way back to Norway.

Following a long-term decline from an estimated 10,000 individuals in the early 20th century, the Fennoscandian population has long been balancing on the brink of extinction. However, since 2009 the decline appears to have halted – and there has been an increase in numbers.

Crucial action for the conservation of the Fennoscandian population is being undertaken within the framework of the current EU LIFE + project “Safeguarding the Lesser White-fronted Goose Fennoscandian population in key wintering and staging sites within the European flyway” - of which the UNEP/AEWA Secretariat is a partner – as well as within the wider Lesser White-fronted Goose conservation network.

The LIFE+ project partners are delighted by this astonishing news - yet also cautious as great responsibility now lies in the hands of the countries along the flyway of the Fennoscandian Lesser White-fronted Geese to ensure the further survival of these birds during their migration.