Cooperation Between World Heritage for the Benefit of Migratory Birds: The Wadden Sea and Banc d’Arguin 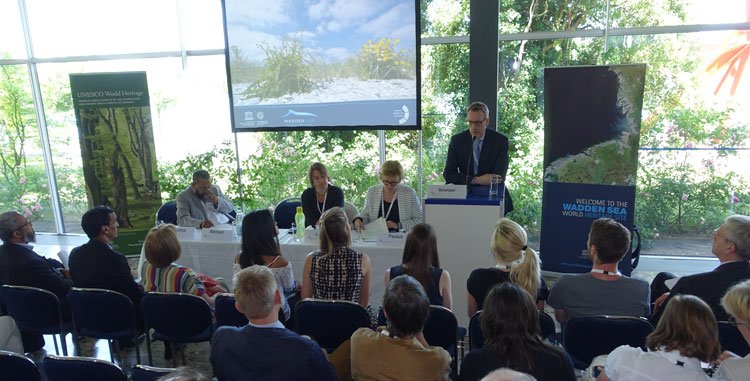 Bonn, 8 July 2015 - Two natural World Heritage Sites - the Wadden Sea shared by Denmark, Germany and the Netherlands - and the Banc d’Arguin in Mauretania  are two critically important sites for millions of migratory birds along the Eastern Atlantic Flyway. At the side event “The Wadden Sea and Beech Forests – Transboundary Management of World Heritage Sites as a Contribution to Global World Heritage Conservation” organized by the German Ministry for the Environment, both government officials and conservationists stressed the need for transboundary management to conserve unique ecosystems that stretch across borders. The side event took place in the margins of the 39thsession of the UNESCO World Heritage Committee in Bonn, Germany. It was co-hosted by BMUB, BfN, the Hessian Ministry of the Environment, Climate Protection, Agriculture and Consumer Protection and the Common Wadden Sea Secretariat.

Dr. Christiane Paulus, Deputy Director General responsible for Nature Conservation, German Federal Ministry for the Environment, highlighted that following the inscription of the Danish section in the World Heritage list in June 2014, the entire Wadden Sea was now listed as a World Heritage Site. The full inscription helps protect millions of waterbirds that travel along the East Atlantic Flyway between the Arctic and Africa every year.

Rüdiger Strempel, Secretary of CWSS, stated that the Wadden Sea constituted the world’s largest unbroken stretch of intertidal mudflats and a highly productive ecosystem, hosting as many as 10,000 different species. He explained that the area was an important site for 10-12 million birds, which pass through the region during their migration between the Arctic and Africa, with up to 6 million birds at the same time resting and feeding in the region at certain times of the year.

With the inscription of the Wadden Sea in the World Heritage list, UNESCO had acknowledged the crucial importance of the site for the survival of migratory birds on a global scale. UNESCO requested the States Parties cooperating in the framework of the Trilateral Wadden Sea Cooperation (Denmark, Germany, the Netherlands) to strengthen cooperation on management and research activities with other States Parties along the  African Eurasian Flyway, in order to support conservation efforts for  migratory birds along the entire flyway. This had led, among other things, to the launch of the Wadden Sea Flyway Initiative (WSFI), which is being funded by the governments of the three Wadden Sea states and in which CWSS cooperates closely with the African-Eurasian Waterbird Agreement (AEWA), BirdLife International and Wetlands International. Moreover, on 6 February 2014, the Parc National du Banc d’Arguin (PNBA) and the CWSS signed a Memorandum of Understanding (MOU) to strengthen their cooperation for the conservation of migratory birds along the East Atlantic Flyway.

Lemhaba Ould YARBA, Chief of the Observatory of PNBA explained that the main spawning and breeding zones and nurseries for marine species and birds of the region are found at PNBA; they also contain the largest submarine seagrass beds of the East Atlantic Ocean. Key species include marine turtles, migratory birds and gazelles.

PNBA is located at a unique crossroads of species migrating between the northern and the southern hemisphere. In particular, the World Heritage Site is a major wintering and breeding ground for migratory birds.

Despite the geographical distance, the similarities between both World Heritage Sites are obvious. Both have large spawning grounds for fish and they serve as sites of significant importance for birds. In addition, both are Ramsar and World Heritage sites.

To round off the presentations, Dr. Jutta Leyrer, Michael Otto Institute of NABU, underscored the importance of both sites for migratory birds, in particular shorebirds. The Wadden Sea was an important fuel station for species such as the Red Knot and the Black-tailed Godwit, two CMS- and AEWA-listed species which depend on both sites and which use the East Atlantic Flyway during their annual migrations.. Dr Leyrer said the MOU was signed to ensure better protection of the two sites. Sharing knowledge and experience on transboundary management and supporting research are major action points. Enhancing communication about these sites would help people understand the need to conserve migratory birds and the critical sites they need to survive.