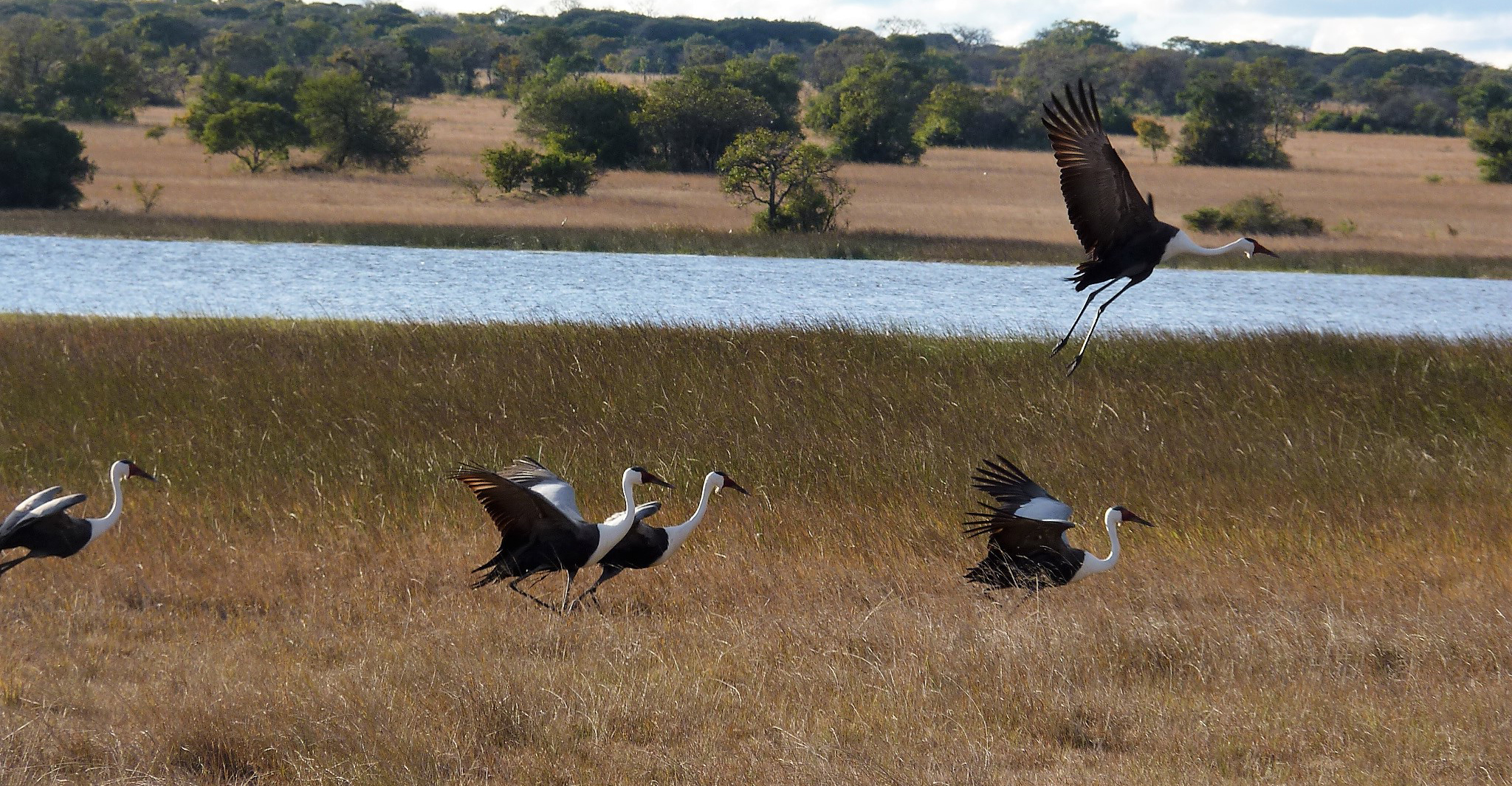 Bonn, 5 December 2019 - The Grey Crowned-crane (Balearica regulorum), a tall and majestic bird, which occurs in eastern and southern Africa, is listed as Endangered on the IUCN Red List of Threatened Species. It has been facing various threats such as habitat degradation and loss, disturbance from livestock and people during the breeding season and the illegal removal of birds and eggs from the wild.

Through co-funding under the AEWA Small Grants Fund activities were supported in Zimbabwe focusing on the conservation of the Grey Crowned-crane as well as the Vulnerable Wattled Crane (Bugeranus carunculatus). The activities under the project helped to verify specific threats to the two crane species in the country, as well as determine their presence and geographical distribution in key known wetlands and other sites with potential to host the species. The activities were led by BirdLife Zimbabwe over the period 2018-2019 and implemented with additional support from the Zimbabwe Parks and Wildlife Management Authority (ZPWMA), non-governmental institutions and local community groups as well as the African Crane Conservation Programme, which is responsible for coordinating the implementation of the AEWA International Single Species Action Plan (ISSAP) for the Grey Crowned-crane.

A desk study carried out in early 2018 in the framework of the project provided valuable information on sites known to have hosted cranes in the past, as well as indications of potential wetland sites that could support the two crane species. Subsequently, ground surveys were conducted at various locations in the Driefontein Grasslands in July 2018 and at Hwange National Park and wetlands in the Lupane and Nkayi Communal areas in December 2018, to confirm reports on the presence and distribution of both crane species at these sites. A number of additional areas surveyed in September 2019, including Mvuma, Lalapansi, Somabhula, Lower Gwelo and Fort Rixon, confirmed the presence of both species at potential new sites. Out of seven additional surveyed sites with no historical records of crane sightings, six sites each supported a breeding pair of Grey Crowned-cranes, while two sites supported breeding pairs of Wattled Cranes. In total, 84 Wattled Cranes and 115 Grey Crowned-cranes were recorded at the Driefontein Grasslands in central Zimbabwe, identified as an Important Bird and Biodiversity Area (IBA) and a site of Critical Importance for the survival of Wattled Cranes, and nominated as a Wetland of International Importance (Ramsar Site). Analysis of the data obtained from the ground surveys was used to produce graphs and maps on the temporal and spatial distribution of both crane species.

A social survey conducted in ten villages in June 2018 assessed local knowledge about cranes, human-crane interactions, habitats where cranes had been observed and threats to wetlands. This revealed the highest threats to cranes to be crane-human conflict issues linked to agriculture and fires in wetlands ranked as they contribute to loss of eggs and chicks and habitat degradation. A threat assessment of eight of the wetlands was carried out in September 2019, with habitat loss and degradation, due mainly to cattle trampling, grazing and cultivation, observed as a key threat affecting the cranes in Zimbabwe.

In December 2018, 12 Park Rangers at Hvange National Park were trained on monitoring species and collecting data. Similar training was carried out at Driefontein Grasslands in July 2018, involving eight participants, among them a ZPWMA ranger. The trainees will act as a network of local and site-based custodians, who will be involved in future monitoring of cranes.

Finally, the existing national action plan for the conservation of the Wattled Crane and Grey Crowned-crane was updated, primarily based on two consultation meetings, which were held with local community participants in Driefontein Grasslands and Hwange in September 2019. Complementary information was obtained from key local stakeholders including park officers, the Environmental Management Agency, Agricultural and Extension Services, Forestry Commission Officers, members of the academia and civil society organisations. A draft updated plan, valid for the period 2020-2024, is currently undergoing further consultation with key actors, among them the Ministry of Environment Tourism and Hospitality Industry.

The UNEP/AEWA Secretariat would like to congratulate BirdLife Zimbabwe and its collaborating partners on their achievements and hopes that follow-up activities can build on the results of the activities in order to further strengthen conservation action for the Grey Crowned-crane and Wattled Crane in Zimbabwe.

BirdLife Zimbabwe
Founded in 1951, BirdLife Zimbabwe is a non-profit organization promoting the conservation of birds and their habitats in Zimbabwe and beyond. It has been a partner of BirdLife International since 2002.