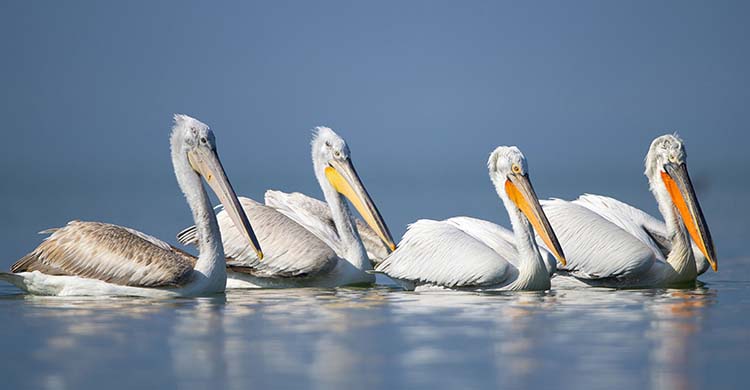 6 April 2022 - On 15 February 2022, an outbreak of avian influenza was detected at the Prespa National Park, in Greece, resulting in mass mortality events that have severely impacted the Dalmatian Pelican (Pelecanus crispus) breeding colony found in the Lesser Prespa Lake.

The Dalmatian Pelican is classified as Near Threatened according to the IUCN and is listed under the African-Eurasian Migratory Waterbird Agreement (AEWA) – in Column A (categories 1a & 1c for the Black Sea & Mediterranean population) - and the Convention on Migratory Species (CMS) – on both appendix I and II. These migratory waterbirds are known to nest in colonies running along south-east Europe to east-central Asia.

The Greek National Reference Laboratory for Avian Influenza has confirmed the presence of H5N1 HPAI virus in the samples taken from the Lesser Prespa Lake population. The transmission of the highly pathogenic avian influenza can be influenced by a variety of environmental and biological factors. Colonial breeding in Dalmatian Pelicans can facilitate the disease transmission due to the proximity and density of its breeding colonies.

The Society for the Protection of Prespa (SPP) has reported to have collected most carcasses to date, amounting to 1143 individuals as of 24 March 2022. Dalmatian Pelican mass mortality has also been observed in adjacent wetlands in the region. The unfortunate news coming from Greece confirm several reports of similar outbreaks happening over the past few months in different countries along the African-Eurasian flyway such as the UK, the Netherlands, Israel and Senegal.

However, following recommendations given by the Scientific Task Force on Avian Influenza and Wild Birds – established by CMS in 2005 in cooperation with AEWA, the Prespa National Park authorities have been fast in taking action and successfully removing most dead wild birds. This is an encouraging development as a fresh batch of migratory waterbirds such as Great White Pelicans are expected to be arriving to the Park in the coming weeks, highlighting the importance of effective measures in containing the outbreak.

Avian influenza continues to remain a threat to bird species, and as the Prespa National Park case shows, conservation gains could be significantly reversed by a disease outbreak within a short period of time. The Park authorities have for instance counted only 32 active Dalmatian Pelican nests following the mass mortality event, while there were reportedly 1370 nests in the same period last year. The need for proper guidance in dealing with outbreaks is therefore of high importance.

As a response to the recent outbreaks, the Scientific Task Force on Avian Influenza and Wild Birds has released a statement and a set of recommendations aimed at countries at risk :