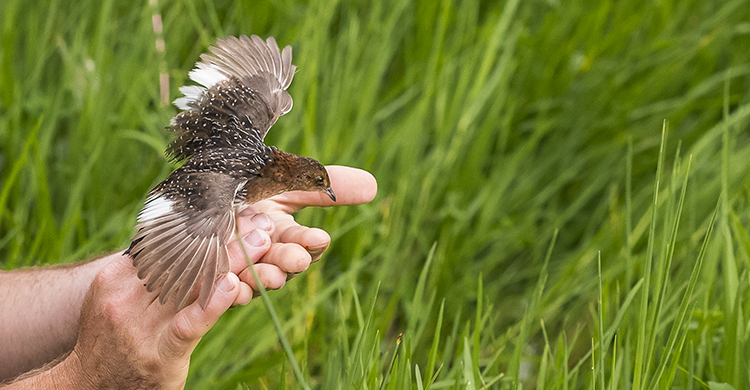 Bonn, 19 November 2019 – Government representatives and conservation experts gathered at Verlorenkloof Estate, near Dullstroom, Mpumalanga Province, South Africa for the third meeting of the African-Eurasian Migratory Waterbird Agreement’s International Working Group for the White-winged Flufftail (Sarothrura ayresi) (AEWA WwF IWG). The Meeting took place close to the Middelpunt Wetland which was recently discovered to be a breeding site for the elusive species; previously the only known breeding site was Berga Wetland in Ethiopia.

The Meeting considered updates from the reports of the two Range States, Ethiopia and South Africa, which included two remarkable recent revelations – the discovery of a first ever breeding record in the southern hemisphere in 2018 as reported on the AEWA website and the first ever recording of the bird’s call as reported by BirdLife International.

Robin Colyn of BirdLife South Africa explained the new study techniques, which had been developed and which were proving to be highly effective, while Bruktawit Abdu of Ethiopia reported on the latest research findings from that country. Hanneline Smit-Robinson of BirdLife South Africa and Coordinator of the AEWA WwF IWG provided an overview of the results of the recent genetic study. The latest scientific findings profoundly changed conservationists’ understanding of the bird’s ecology and behaviour, leading to a major revision of the implementation plan for the coming three years. The meeting also identified those measures needing additional funding and the leads for fundraising for each of them. The formalization of the community-based conservation programme in Berga, Ethiopia was discussed in a dedicated session and its development was advanced.

A field trip was undertaken to the Middelpunt Wetland, the BirdLife South Africa Rallid Survey research site, which is managed by the Middelpunt Wetland Trust. Unfortunately, no White-winged Flufftails were present as the habitat conditions were not optimal due to the late arrival of the rains this year. Heavy rains are, though, expected in the coming weeks, averting disaster as the continuing drought could lead to an entire breeding season being missed.

The meeting was chaired, hosted and funded by the Department of Environment, Forestry and Fisheries (DEFF) of South Africa.  The 4th meeting, due to be held in three years, will be hosted by Ethiopia. The chairing of the IWG for the next three years was passed rotationally to Ethiopia.

Sergey Dereliev, UNEP/AEWA Secretariat, said: “The Government of South Africa is a strong champion for the conservation of the White-winged Flufftail and has proved that again by funding and hosting this important meeting. In the last two years important scientific findings were made by BirdLife South Africa which significantly improved our understanding of the species and influenced our conservation planning. There is still more to discover and learn, however, clearly current highest priorities are securing the future of the Middelpunt Wetland in South Africa and Berga Wetland in Ethiopia. The existence of the White-winged Flufftail is entirely dependent on these irreplaceable sites.”

Hanneline Smit-Robinson said: “We would like to commend the Government of South Africa for its strong support, specifically for the establishment of a National Working Group for the conservation of the White-winged Flufftail, which has met annually since 2016. BirdLife South Africa and Middelpunt Wetland Trust commit their continued support to the saving of the species.  Whilst further research, building on recent scientific breakthroughs by the team, will help to inform and enable decision-making, such research needs to be directed in parallel with the implementation of critical conservation actions. The most important of these actions highlighted in the Implementation Plan is to safeguard and protect the irreplaceable breeding habitats in both Ethiopia (Berga Wetland) and South Africa (Middelpunt Wetland), if we are to ensure the continued existence of the species.