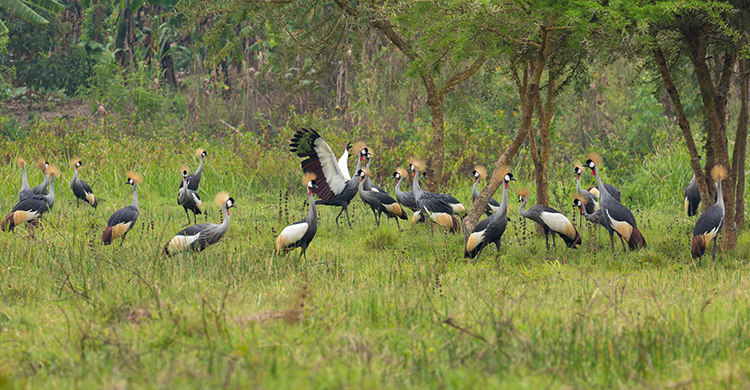 Bonn, 5 August 2019 – The AEWA International Working Group for the Grey Crowned-crane (GCC IWG) met for the first time in Entebbe, Uganda from 24 to 26 July.  After intensive discussions, considerable progress was made in drawing up a concrete implementation plan covering the period to 2022, with specific national activities complementing wider regional and international tasks.  The motivation and commitment of the participants were exemplary, and if all the pledges of financial and other support materialise, the future for the Grey Crowned-crane seems brighter.

“The commitment to the conservation of Grey Crowned-cranes made by the group was fantastic.  This was evident not only in the ownership taken during the development of the activities required over the next three years, but in the report back from each country which outlined already how many organisations and countries had made progress towards the implementation of the plan developed originally in 2013 and adopted in 2015.”

Some time was dedicated to reviewing the actions so far undertaken by the Range States under the Action Plan, and promising progress was reported in some cases.  In several Range States the Grey Crowned-crane has a great cultural significance, not least the host of the meeting - Uganda - where the bird appears on the national coat of arms.  Public awareness of the need to conserve the species is therefore quite high.

The version of the draft implementation plan developed at the meeting will be reviewed by the Secretariat and the IWG coordination team before submitting it for further consultations at the national level in the species range states.  It should prove possible to finalise the plan through correspondence over the next few months, but in the meantime, ongoing activities will continue and urgent new activities will be launched.

Participants were able to take part in a field trip to the Kaku wetland and saw a flock of some 120 Grey Crowned-cranes roosting on a nearby farm.  A group of local ‘crane custodians’, who operate under an initiative set up by the EWT, ICF and the local NGO, Nature Uganda, escorted the participants and explained how highly cherished the birds are.  Another incidental highlight of the tour was a sighting at Masaka of a rare Shoebill (Balaeniceps rex), another AEWA species for which there is a Single Species Action Plan.

Uganda was elected to chair the working group, which is expected to meet again in three to four years’ time.  Since the initial action planning workshop and first meeting of the IWG both took place in East Africa, a venue in a southern African country was suggested.

The meeting was made possible thanks to a generous contribution of the European Commission's Global Public Goods and Challenges (GPGC) Programme in support of the AEWA African Initiative as well as to co-funding by the hosts, the Ministry of Tourism, Wildlife and Antiquities of the Republic of Uganda.

The European Commission were recognized as Champion Plus for their generous support of and commitment towards the AEWA African Initiative for the period 2017-2020. This meeting has been funded with the contribution granted by the European Commission under the Migratory Species Champion Programme and through the Global Public Goods and Challenges (GPGC Programme) Cooperation Agreement with UN Environment.