For Birds and People: Improving Food Security and Management of Waterbirds across the Sahel 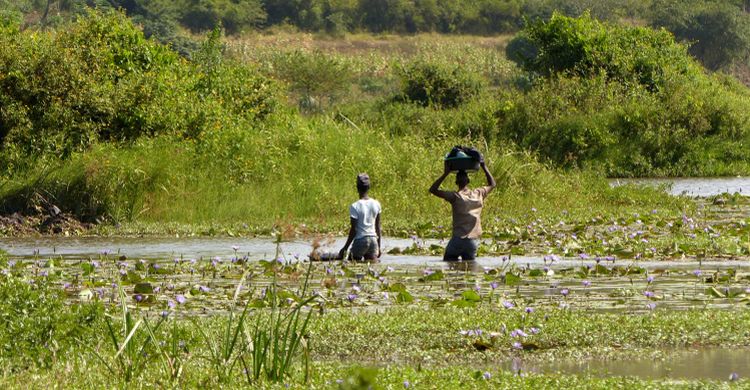 Bonn, 24 October 2016 - the Food and Agriculture Organization of the United Nations (FAO) announced earlier this month that it would be working in partnership with the French Facility for Global Environment (FFEM) in the wetlands of the Sahel in Africa to improve the state of natural resources.  This agreement will focus on the sustainable management of migratory waterbirds, which play a significant role in guaranteeing food security for people living in the region.

An agreement between the FAO and the FFEM was signed on 6 October under which four principal wetland areas in five AEWA Contracting Parties of the Sahel – from Senegal in the west through Mali, Chad and Egypt to Sudan in the east – will be targeted.  The FFEM is co-funding one third of the project’s €5 million budget.

The project will be known as RESSOURCE, the acronym for the French equivalent of "Strengthening expertise in Sub -Saharan Africa on birds and their rational use for communities and their environment".  The ecosystems at the core of the project are based on the Senegal River Valley, the Inner Niger Delta, Lake Chad and parts of the River Nile, areas upon which almost one billion people depend for agriculture, rearing of livestock, fishing and hunting.

“Among the natural resources found in wetlands, there is one that is often overlooked: migratory waterbirds, which hunted by different methods, for subsistence, and both commercially and for sport, in fact represent for many local populations a direct source of protein, often complementing the protein obtained from fishing and of revenue through commercial hunting, from hunting tourism and wildlife watching which is organized in certain wetlands.”

This project concerns birds, a group rarely addressed by conservation programmes financed through international aid, which tend to focus on large mammals.

It will attempt to evaluate the sustainability of exploiting the resources made up by waterbirds thanks to its integrated approach which aims to: (i) find out about the resource both in terms of the numbers and distribution and in terms of its socio-economic importance, especially for rural communities (ii) to preserve its habitats and (iii) to propose conservation measures at community level.

“The future of waterbirds in Africa cannot be secured if we do not build alliances with local communities for the wise use of wetlands and their birds. Livelihood and well-being are linked to the conservation of our natural resources. This project led by FAO and supported by FFEM involves not only the AEWA Secretariat but also key partners: ONCFS, CIRAD, OMPO - all of them represented on the AEWA Technical Committee.  The funds provided by FAO and FFEM through this project will contribute significantly to the implementation of the Plan of Action for Africa adopted by Parties at MOP5.”

The involvement of the FAO in this project demonstrates clearly the importance that waterbirds have for food and socio-economic security of populations living in wetlands, which are vital but very fragile ecosystems, threatened by considerable man-made pressures, the impact of which is exacerbated by the growth of the human population and the risks associated to global climate change.

To read more about the project, see the websites of the FAO and the FFEM.