How to Become a Party

Who can become a Party and how?

Since the day of its entry into force, all non-signatory range states can become Parties to the Agreement through accession. Accession is the act whereby a state undertakes to become a party to a treaty already negotiated and signed by other states, but which, after a certain date, has been closed for signature. The deposit of the relevant instruments with the depositary binds the State concerned at international law.

Steps to become a Party

In order to involve all government stakeholders at an early stage, an inter-ministerial committee can be set up to ensure an efficient consultation process. In consultation with other ministries involved, (e.g. the ministry of finance, agriculture etc.), the competent authority for the implementation of the Agreement, usually the ministry of environment, may wish to prepare a document concerning the implications of accession to AEWA. The document should address, among other issues, the administrative and legislative framework necessary for implementing AEWA, the need for new laws, as well as a cost-benefit analysis of becoming a Party to AEWA. This document can be used as an informative basis for the decision regarding accession to AEWA.

Assuming that there is the political will to proceed, the lead authority then consults with the Government authority responsible for drafting ratification instruments for international agreements, normally a legal unit within the ministry of foreign affairs. This responsible authority identifies who at the national level should, as a rule, take a decision on or approve accession to the Agreement. The decision-making authority indicates the necessary documentation and decision-making processes that need to be completed before the instrument can be signed and deposited. In addition to obtaining the necessary approval within the administration of the head of State or head of Government, or by parliamentary debate, such processes may include new legislation, a judicial review, or evaluation at different state levels.

Reservations at the time of accession: A reservation is a formal declaration by a State, at the time it takes the action required to become a party to a treaty, announcing that it does not consider itself bound by some of the treaty’s provisions. A reservation may enable a State to participate in a multilateral treaty in which it would otherwise be unwilling or unable to participate. AEWA’s provisions are not subject to general reservations. However, specific reservations may be entered on depositing the instrument of accession in respect of any species covered by the Agreement or any specific provision of the Action Plan. Such a reservation can be withdrawn at any time by notification in writing to the Depositary.

Step 4. Depositing the instrument of accession:

Information for submission of instruments: 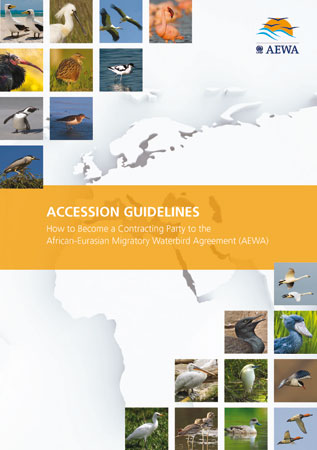 The Ministry of Foreign Affairs of the Kingdom of the Netherlands
Legal Affairs Department
Treaties Division (DJZ/VE)
P.O. Box 20061
2500 EB The Hague
The Netherlands