Satellite Tracking of Lesser Flamingos : A Training Workshop in Senegal 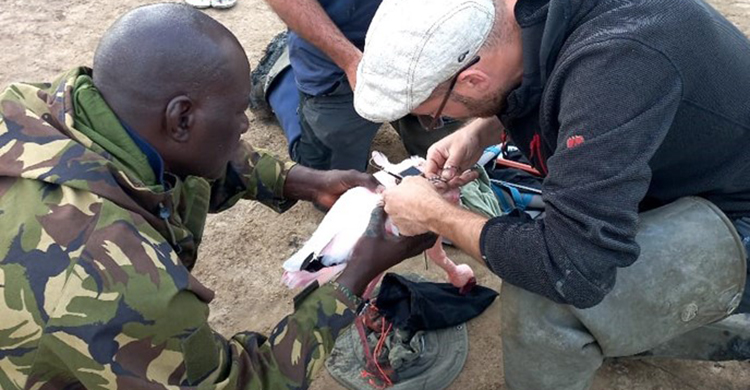 Bonn, 14 December 2021 - A training workshop on satellite tagging and satellite telemetry monitoring of Lesser Flamingos (Phoeniconaias minor) took place at the Djoudj National Bird Park (PNOD) in Senegal from 2 to 5 December 2021. Hosted by the government of Senegal, the 4-day training was jointly organized by the Senegal National Parks Directorate (DPN), the Mauritanian Directorate for the Protection and Restoration of Species and the  Environment (DPREM), the UNEP/AEWA Secretariat and the Tour du Valat research institute. The training was made possible thanks to financial support from the Convention on Biological Diversity (CBD) in the framework of a project funded under the Bio-Bridge Initiative (BBI), as well as in-kind contributions from the Governments of Senegal and Mauritania, Tour du Valat and the UNEP/AEWA Secretariat.

The 4-day training workshop which brought together 15 technical experts from Senegal and four from Mauritania, helped familiarize participants with the concept and practical aspects of satellite tracking of birds, in particular Lesser Flamingos. The participants hailed from key national parks of known importance for the survival of the Lesser Flamingo in Senegal and Mauritania, as well as institutions involved in the monitoring of the species. These included, among others, the Senegal DPN, Djoudj National Bird Park, Djoudj Biological Station, Saint Louis Marine Protected Area and Eco-guard Associations of PNOD and the Langue de Barbarie National Park in Senegal, as well as the Mauritanian DPREM, Banc d’Arguin and Diawling National Parks. Participants underwent an intense and hands-on training, guided by the two main trainers from Tour du Valat, Antoine Arnaud and Thomas Blanchon.

The first day of the workshop consisted of theoretical sessions during which the trainees were introduced to the basic concepts of satellite tagging and the use of satellite telemetry for monitoring of wildlife, including birds, the use of mapping tools to exploit satellite data and techniques of capturing birds for installation of satellite tags on the birds. The theoretical part also touched upon the observation of ringed birds and transcription and communication of observations from ringed birds, which is another method of monitoring movement of birds. 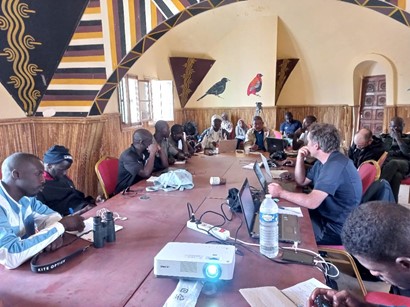 Following the theoretical part of the training, participants immersed themselves in three days of mainly practical field training in the Djoudj National Bird Park. In the course of the field practice, three out of the four satellite transmitters purchased in the framework of the project were successfully installed on Lesser Flamingos captured during the training workshop. Together with the trainers, the trainees learned and practiced how to locate and carefully trap the birds. A number of Lesser Flamingos were successfully captured, and the satellite tags were subsequently installed on the captured individuals, thus putting into practice the new knowledge and skills acquired during the first day of the workshop. The actual observation of the ringed birds at the Djoudj National Park constituted part of the field exercise.

The training workshop also provided a useful opportunity for participants to share information, data and experience on flamingo counts in the region, during a “Flamingo workshop” conducted on day two.

The training course has enabled trainees to enhance their knowledge on the satellite telemetry technology, strengthen their capacity for capturing targeted birds, attaching light satellite transmitters to them and subsequently accessing information on the movement of the birds through a satellite information system. The satellites will transmit the location of the tags back to receivers on the Earth’s surface, thus enabling users of the technology to track the movements of the birds in space and time.

The very active participation, skill and enthusiasm of trainees and trainers alike contributed to the success of this training workshop which received much positive feedback. It is hoped that the data acquired through the satellite tracking of the birds will complement information about the migration behaviour of individuals of the West African population of the Lesser Flamingo and the sites used by the birds during their annual cycle. This will hopefully lead to the identification of additional sites of national and international importance for the species’ conservation and thereby better inform the conservation action for the Lesser Flamingo.

The training workshop has made an important contribution to AEWA’s efforts to enhance the technical capacity for scientific research in the African region. The AEWA Plan of Action for Africa 2019-2027 attaches considerable importance to improving capacity in the region, including through actions to identify and address gaps in capacity as well as promote partnership for institutionalized capacity enhancement efforts and joint research programmes to address priority knowledge gaps. Such capacity enhancement actions are highlighted, among others under the Plan’s targets 5.1 and 5.3.