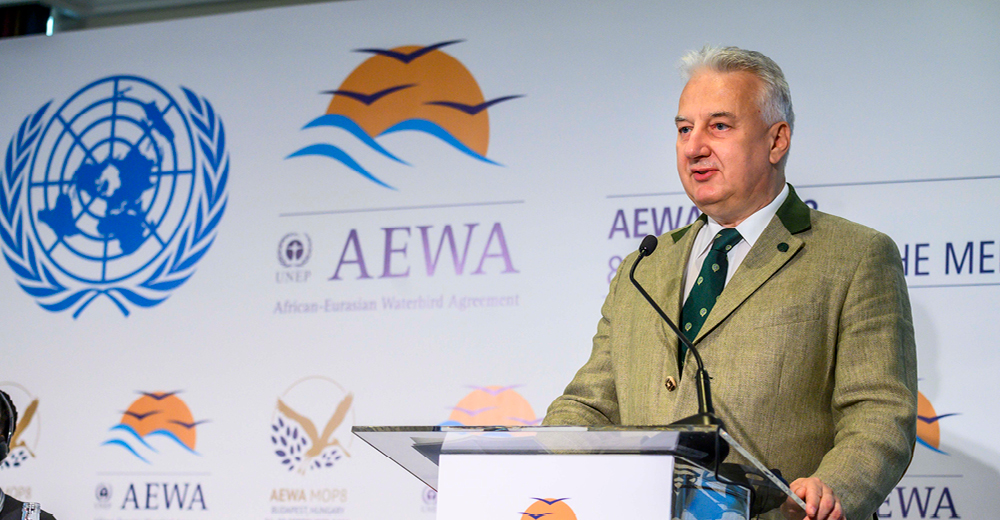 Welcome to the 8th Session of the Parties to the Agreement on the Conservation of African-Eurasian Migratory Waterbirds (AEWA) in Budapest. I am delighted that we are able to host the meeting of this international convention, which is so important for nature conservation in Hungary. Although our original plans were thwarted by the Covid epidemic, we have done our utmost to ensure that the meeting can be held in person, albeit a year late.

The conservation of wetlands and waterbirds is a priority for Hungary, which we have been trying to ensure for many decades through a number of measures. We also know that the efforts of a single country are not enough to protect waterbirds, as they are exposed to many threats during the course of their migration.  We can do all we can to protect them, if the countries along their migration routes do not have the legal regulatory instruments and measures in place to ensure that they find adequate habitats and feeding areas to ensure the necessary resting and living conditions. It is also important that these measures are coordinated. And that is unthinkable without international cooperation.

This is why our country joined the Agreement on the Conservation of African-Eurasian Migratory Waterbirds in 2003. The 255 waterbird species covered by the agreement include many species that nest in or migrate through our country. Even the first steps in domestic conservation were closely linked to the protection of waterbirds. Allow me to highlight a migratory waterbird species of great importance to our country and the measures we have taken to protect it over the past decades.

This is the great egret (Ardea alba), which by the beginning of the 20th century was driven to the brink of extinction across Europe by the demand for its feathers. Its last remaining nesting population bred in the reed wetlands of the Small Balaton in Hungary. The first egret guard, the first paid conservation worker, was appointed exactly 100 years ago, in 1922 in order to save the species from extinction. Since then, thanks to conservation efforts, the Great Egret has become a symbol of Hungarian nature conservation, with a stronger population and increased protection.

Thanks to numerous conservation measures and efforts since the first egret guard was appointed, the protected areas now account for about 22% of the country's territory. More than two thirds of this area is specifically dedicated to the conservation of birds, including waterbirds. Over the past 10 years, Hungarian national parks have invested in conservation on an unprecedented scale to preserve biodiversity. In total, these developments have resulted in more than 300 000 hectares of improved or enhanced habitat. Wetlands and grasslands, which are also important for waterbirds, make up a significant proportion of these areas.

As I have already mentioned, an important condition for the conservation of wetland-associated breeding and migratory bird species is that the areas that provide them with food and security form a coherent network that spans national borders.

Allow me to present to you an excellent example of this, the Mura-Drava-Danube Transboundary Biosphere Reserve, created last year and also named "Europe's Amazonas". This Biosphere Reserve is the world's first biosphere reserve to be created by five countries working together. It was back in 2011, when Hungary held the rotating presidency of the European Union, that Hungary initiated it with the ministers responsible for nature conservation in Austria, Croatia, Serbia and Slovenia. The unique biosphere reserve covers a total area of almost one million hectares. One third of this is in Hungary. We are particularly proud of this, as there is no other nature reserve of its kind in the world, the result of cooperation between five countries.

Migratory birds are decimated by many threats, often caused by human activities, during their shorter-longer migratory journeys. The challenge of reducing illegal killing and over-exploitation is enormous at international level. The main causes of the drastic decline of globally threatened aquatic species are the disturbance and alteration of wetlands, the destruction caused by investments in such areas, by traffic networks, overhead power lines and wind farms, and unsustainable hunting.

The availability of protected areas, including sufficiently large expanses of water and adjacent feeding areas without disturbance for juvenile waterbirds, in all countries along the migration route is key to species conservation. It is our common duty and responsibility to provide these conditions for our migratory waterbirds!

With all this in mind, I wish you a successful discussion in the coming days. I am confident that the decisions taken at this meeting will serve the long-term conservation of our endangered waterbirds and their populations.