Focus on the White-headed Duck in Morocco 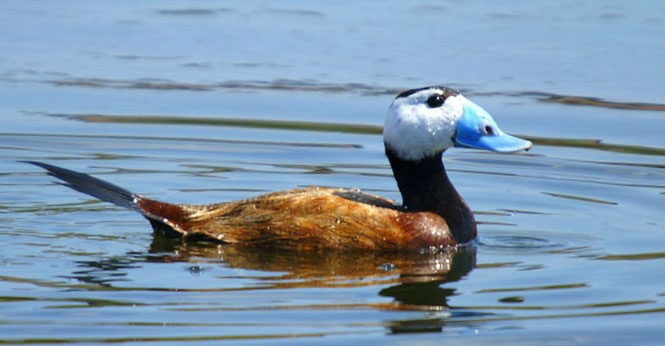 Bonn, 5 February 2018 - The Research Group for Bird Protection in Morocco (GREPOM) has successfully completed a project which contributes to improving the conservation status of the White-headed Duck (Oxyura leucocephala) in Morocco. The project which received support from the AEWA Small Grants Fund was conducted over the period of February 2016 to November 2017.

The White-headed Duck is classified as Endangered on the IUCN Red List of Threatened Species. Its West Mediterranean population occurs in Spain and Morocco. Listed in Column A of the Status of Migratory Waterbird Populations under AEWA, it requires urgent conservation attention. Once known to breed in Morocco in the early 20th century, this population experienced a drastic decline in the country by the 1950s.

This project co-funded by AEWA was implemented by GREPOM, in close collaboration with the High Commission for Water, Forests and Combating Desertification (HCEFLCD) in its capacity as the national AEWA implementing agency, as well as other national stakeholders.

Project activities included the organization of a multi-stakeholder consultation meeting which resulted in the establishment of a national working group given the task of guiding and coordinating the conservation of the species. This national working group includes Morocco’s representatives on the AEWA International Working Group for the White-headed Duck, thereby maximizing collaboration at the flyway scale.

The members of the new national species working group, as well as some young conservation volunteers were trained on techniques for the identification and monitoring of waterbirds and wetlands, with a focus on the White-headed Duck, including on the major issue of distinguishing it from the Ruddy duck (Oxyura jamaicensis) and their hybrids. The working group members participated in a series of national waterbird monitoring expeditions conducted at over twenty wetlands where the species is known to occur or potentially occur, including Embouchure Oued Moulouya, Merja Sidi Boughaba, Sebkha Bou Areg, Sidi Moussa-Walidia and Dwiyate which has been identified as critical for the survival of the species. The data thus obtained enabled the production of a report on the national status of the species and its key sites in Morocco.

Another project workshop which brought together key national stakeholders led to the development of a national Single Species Action Plan (SSAP) for the White-headed Duck. The plan defines the key actions required at the national level in order to help improve the conservation of the species’ population and its key sites. This national plan will contribute to the implementation of the international SSAP for the White-headed Duck which was approved by the 3rd Meeting of the Parties to AEWA in 2005.

The project also reached out to various stakeholders in order to increase awareness on the White-headed Duck and other waterbird species occurring in Morocco. In this regard, field excursions and audiovisual presentations were organized in the framework of the 2017 World Migratory Bird Day celebrations at the Souss-Massa, Sidi Mousa-Walidia and Kenitra wetlands. In addition, GREPOM, in collaboration with the Royal Hunting Federation of Morocco (FRMC), organized an awareness-raising workshop for hunters. The workshop focused on the conservation and development of the hunting heritage in the country, as well as raised awareness on non-huntable species and the impact of poaching.

The UNEP/AEWA Secretariat would like to thank GREPOM, HCEFLCD, FRMC and all other stakeholders who have contributed to the successful completion of this project.