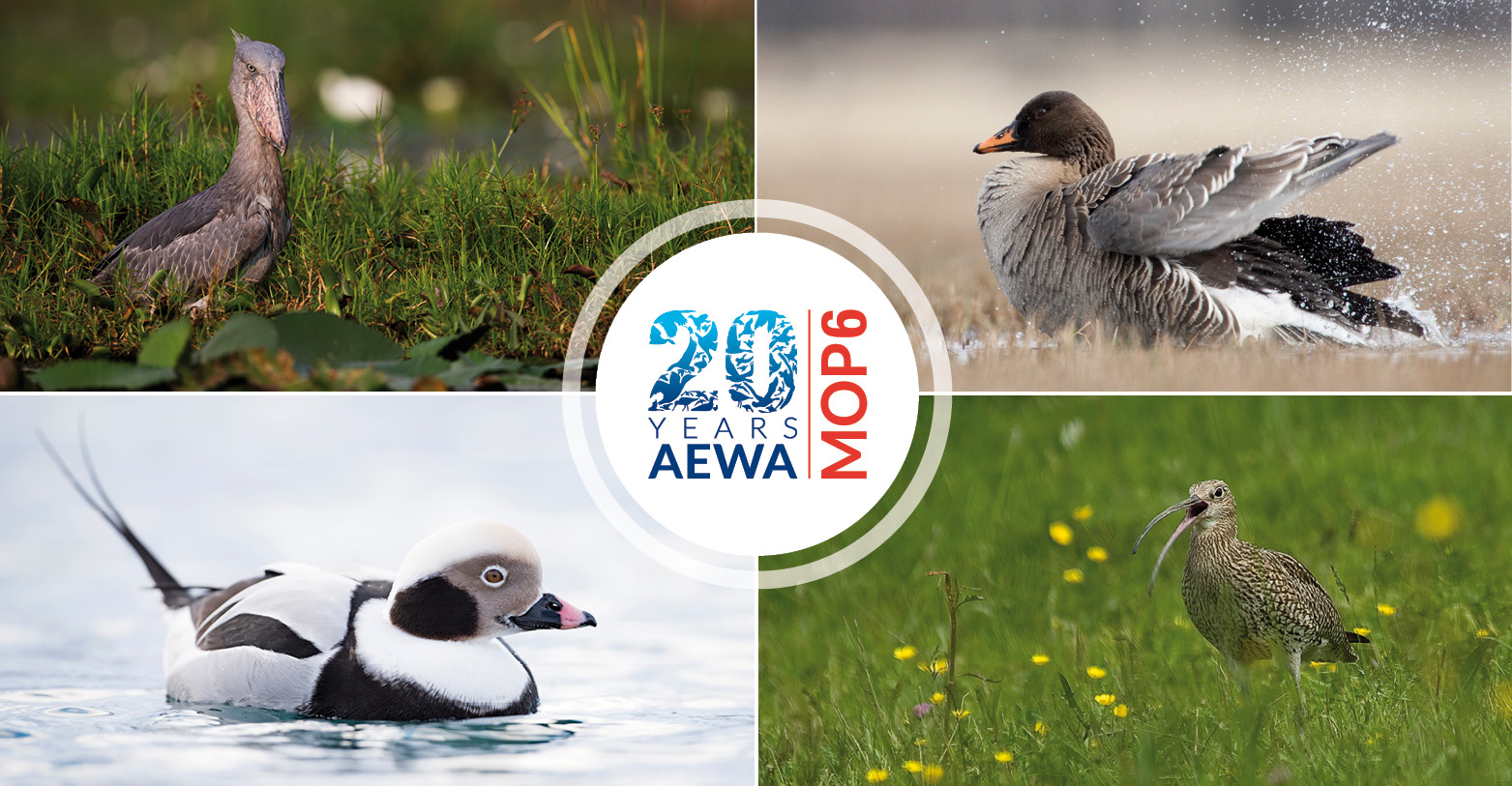 Bonn, 16 November 2015– 22 resolutions, including action plans for highly threatened seabirds and guidelines for the sustainable use of waterbirds, were adopted at the Sixth Meeting of Parties (MOP6) to the Agreement on the Conservation of African-Eurasian Migratory Waterbirds (AEWA), administered by the United Nations Environment Programme (UNEP), which concluded on Saturday at the United Nations Campus in Bonn.

Migratory waterbirds such as storks, ducks, geese and the African Penguin are especially vulnerable to a wide range of threats along their often long migration routes across Africa and Eurasia.

Jacques Trouvilliez, Executive Secretary of AEWA said: "AEWA forms a bridge between Eurasia and Africa, which is indispensable for the conservation of transcontinental migrants. The objectives of the EU Birds Directive adopted in 1979 cannot fully be achieved if actions are limited to just the political dimension. AEWA allows concerted actions to be launched throughout the flyway which extends from Russia to South Africa; however, the pressures on the birds vary from north to south."

"Our actions are based not only on the best scientific expertise but also on reconciling human well-being with biodiversity conservation because without the support of local communities we cannot succeed," he added. "The conservation of nature requires both scientific knowledge and involvement of human societies. It explains the focus on Africa through the African Initiative of the Agreement adopted 3 years ago.”

Abdoulaye N’Diaye, CoordinatorTechnical Support Unit to the African Initiative of AEWA and the winner of the 2015 AEWA Conservation Award said: "Waterbird conservation in Africa is linked to improving the livelihoods of people. We cannot just assume that the same level of capacity for wetland management and monitoring of our shared waterbirds exists across the Flyway."

More than 200 representatives and key experts from party states, observer states, intergovernmental and nongovernmental organizations attended the conference to guide future conservation efforts for migratory waterbirds across the African-Eurasian Flyway. AEWA was concluded 20 years ago under the auspices of the Convention on the Conservation of Migratory Species of Wild Animals (CMS). It is the largest legally binding agreement under the Convention to date.

Seabirds are among the most threatened group of birds in the world. For the first time in AEWA history, an action plan for nine species of seabirds has been adopted, involving Angola, Namibia and South Africa.

“Seabirds are sentinels of ocean health and some are signaling distress. Concerted, coordinated and collaborative efforts are required to save our seabirds and thereby secure our oceans”, said Dr. Ross Wanless, Africa Coordinator of the Global Seabird Programme of BirdLife South Africa, who co‑authored the Review of the Status, Threats and Conservation Action Priorities for the Seabird Populations Covered by the Agreement and the Review of Potential Impacts of Marine Fisheries on Migratory Seabirds within the Afrotropical Region, which was presented at MOP6.

Seabirds' conservation status is deteriorating faster than in any other group of birds, with fisheries posing a major risk through bycatch and depletion of prey. Seabirds are also threatened by invasive species on islands, ingestion of microplastics, offshore wind farms, oil spills, disturbance at breeding sites, harvesting and climate change.

To address these challenges, countries have agreed to establish and complement a network of marine protected areas. They have also pledged to support the decisions of the United Nations Environment Assembly (UNEA1) on marine debris, and of the UN Food and Agricultural Organization (FAO) to comply with regulations to protect seabirds, as adopted by Regional Fisheries Management Organizations. Inexpensive modifications in fishing gear have proven to significantly reduce accidental mortality of seabirds.

The conference also adopted action plans for six priority species, three of which occur only in Africa. These include Uganda’s national bird, the endangered Grey Crowned Crane, which has suffered a decline of 80 per cent over the past 45 years.

Kerryn Morrison, Programme Manager of the African Crane Conservation Programme and Coordinator of the Action Plan said: “It is a fantastic action plan which really brings together governments across the range of the Grey Crowned Crane as well as NGOs, universities, interested parties and the private sector - all vital to ensuring these charismatic birds remain as icons of Africa's wild grasslands and wetlands."

The Shoebill, which owes its name to its huge beak, is threatened by illegal wildlife trade, loss of habitat from agricultural activities and disturbance by livestock and people. An estimated 5,000 to 8,000 birds remain in the wild. The action plan adopted by MOP6 will try to minimize illegal trade and reduce disturbance and habitat loss for the Shoebill, which will also benefit other species.

Classified as Critically Endangered on the International Union for Conservation of Nature (IUCN) Red List, the Northern Bald Ibis with its characteristic, black head feathers is in danger of becoming extinct. It has suffered a serious decline since the 1950s due to habitat loss, DDT pesticide poisoning and hunting, and more recently electrocution on powerlines. Only 500 birds remain in the wild today. The action plan aims to increase breeding success, reduce mortality, establish new colonies and close key knowledge gaps.

The Taiga Bean Goosewith a wintering population estimated at 100,000 birds in the mid-1990s decreased to 63,000 by 2009, mostly due to legal and illegal hunting. Training, monitoring and hunting control outlined in the new action plan can help restore and maintain viable populations.

Globally, the Long-tailed Duck population has decreased by almost 60 per cent in the last decade due to habitat degradation, oil pollution, drowning through entanglement in fishing nets and hunting. The action plan for this species includes sustainable hunting and modifying shipping routes to contain oil pollution.

Loss and fragmentation of moorland habitats as a result of afforestation, high egg and chick mortalities and intense agriculture are the key threats to the Eurasian Curlew. They have caused a global decline in this species estimated at 20-30 per cent in the past 15 years. The AEWA action plan aims to reverse population decline by reducing the mortality rate of adult birds and increasing breeding success.

AEWA MOP6 also discussed the impact of renewable energy on migratory species, including waterbirds. Renewable energy technologies help to fight climate change, but if not properly installed, they can also harm animals, such as migratory waterbirds. If located along major migration routes, windfarms and hydropower plants can have lethal effects. The guidelines adopted at the meeting recommend assessing the environmental impact when planning the construction of wind turbines and implementing shut-down periods during bird migration.

The Wadden Sea Flyway Initiative (WSFI), launched in 2012, aims to increase capacity for migratory bird conservation and monitoring along the East Atlantic Flyway – a migration system covering the entire Atlantic Coast of Africa and stretching all the way to Northern Europe and Russia. The WSFI network came together on the margins of AEWA MOP6 to discuss future plans for this promising initiative.

The Agreement on the Conservation of African-Eurasian Migratory Waterbirds (AEWA) is the only inter-governmental treaty administered by the United Nations Environment Programme (UNEP) dedicated to the conservation and sustainable use of migratory waterbirds such as divers, grebes, pelicans, gannets, cormorants, herons and egrets, storks, ibises and spoonbills, flamingos, ducks, geese and swans, cranes and rails, waders, gulls, terns, skimmers, tropic and frigate birds, auks and the African Penguin.

With currently 75 Parties out of 119 Range States, it is the largest regional instrument of its kind developed under the framework of the Convention on the Conservation of Migratory Species of Wild Animals (CMS, also known as the Bonn Convention, after the city in which it was signed).

The Meeting of the Parties (MOP)

The decision-making organ of the Agreement, which convenes every three years, reviews the implementation of the inter-governmental treaty. At MOP6, governments will decide on urgently needed conservation and management actions in an effort to ensure the long-term survival of the 255 migratory waterbird species covered by the Agreement.

All meeting documents can be found here:

Other media related resources can be found on the AEWA MOP6 Newsroom: