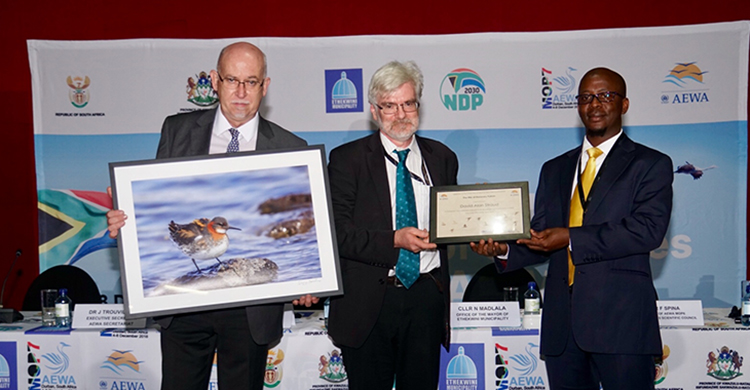 Durban, 4 December 2018 - Today, David Alan Stroud MBE, Senior Ornithologist at the Joint Nature Conservation Committee, was declared Honorary Patron of the Agreement on the Conservation of African-Eurasian Migratory Waterbirds (AEWA).
David Stroud has been part of the bedrock of AEWA since its inception.  He has contributed widely to the development and implementation of the Agreement with involvement across the board in all aspects of its work.  David actively participated in the work of the AEWA Technical Committee and has chaired many working groups over the years.
Upon receiving the award, David Stroud said: “I am greatly honored to be associated with the Agreement in this way. AEWA has made a huge difference. It brings together people and countries throughout the migratory flyways of waterbirds to address the problems these magnificent birds face. Their conservation has been an internationally shared endeavor which I have been proud to be a part of.”
David has been a member of the UK delegation to the Meetings of the Parties to AEWA since 1999. His scientific knowledge and advice underpinned UK input to the Agreement. For example, he edited species action plans and contributed to species listing proposals. The impact of offshore wind parks, poisoning by lead shot and wildlife disease are also part of his expertise.
A species on which David has focused his scientific interest is the Greenland White-fronted Goose (Anser albifrons flavirostris) and he has studied the life cycle of this species.
He is famous for numerous publications on wetland and waterbird conservation and these publications have contributed to raising public awareness on a wide range of conservation issues.
As the JNCC’s senior ornithologist, David has played a major role in many national and international bodies involved in wetland and waterbird conservation, for instance, the Ramsar Convention and Bonn Convention.
Many national and international bodies involved in wetland and waterbird conservation have benefited from his expertise. As a government adviser in the UK, he reported on the development of the EU Birds Directive and its implementation. Being involved in both EU actions and international agreements he worked hard to create interlinkages across the range of waterbird conservation policies.
David received the first AEWA Waterbird Conservation Award in 2005 recognizing his significant contribution towards long-term conservation and sustainable use of waterbirds in the African-Eurasian region.

The Agreement on the Conservation of African-Eurasian Migratory Waterbirds (AEWA) is an intergovernmental treaty dedicated to the conservation of migratory waterbirds that migrate along the African-Eurasian Flyway. The Agreement covers 254 species of birds ecologically dependent on wetlands for at least part of their annual cycle. The treaty covers 119 Range States from Europe, parts of Asia and Canada, the Middle East and Africa.  Currently 77 countries and the European Union (EU) have become a Contracting Party to AEWA (as of 1 October 2018).