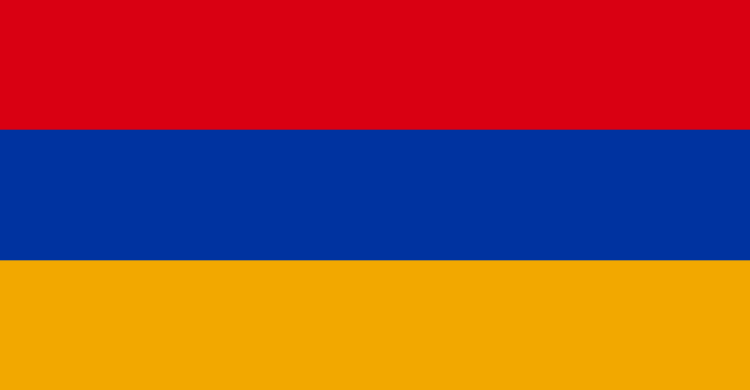 Flag of the Republic of Armenia

Bonn, 1 July 2020 – The Republic of Armenia is acceding to AEWA becoming the 81st Party on 1 July. It has been a Party to the Convention on the Conservation of Migratory Species of Wild Animals (CMS), since 2011.

Armenia, whose capital is Yerevan, is a landlocked country situated in the southern Caucasus, between the Black and Caspian Seas, where Europe meets Asia.  Armenia has a population of 3 million people and an area of just under 30,000 km2. It shares borders with Turkey, Georgia, Azerbaijan and the Islamic Republic of Iran.  The country is predominantly mountainous, with the highest point being Mount Aragats at just over 4,000 metres. Armenia’s largest waterbody, Lake Sevan, is nearly 2,000 metres above sea level, and with an area of 1,242 km2, it is one of Eurasia’s largest alpine freshwater lakes. Nowhere in the country is less than 300 metres above sea level.  The country has a highland continental climate, with hot, dry summers and cold, snowy winters. There is relatively little forest cover and the landscape is marked by fast-flowing rivers.

The country currently has 18 Important Bird and Biodiversity Areas (IBAs), among which are Lake Sevan and Lake Arpi (both of these are Ramsar Sites), and most are designated for their populations of globally threatened species.  Lake Sevan is noted for its important fish populations (including the endemic Sevan Trout) and for its avian fauna with over 200 species recorded including 95 that breed there. Migratory species that frequent the Lake include the Armenian Gull (Larus armenicus), the Red-crested Pochard (Netta rufina), the Ferruginous Duck (Aythya nyroca), the Tundra Swan (Cygnus columbianus), the Pallas’s Gull (Larus ichthyaetus) and more rarely, the Lesser White-fronted Goose (Anser erythropus).

The Secretariat would like to extend a warm welcome to Armenia on joining the AEWA Family and looks forward to fruitful cooperation in the coming years.