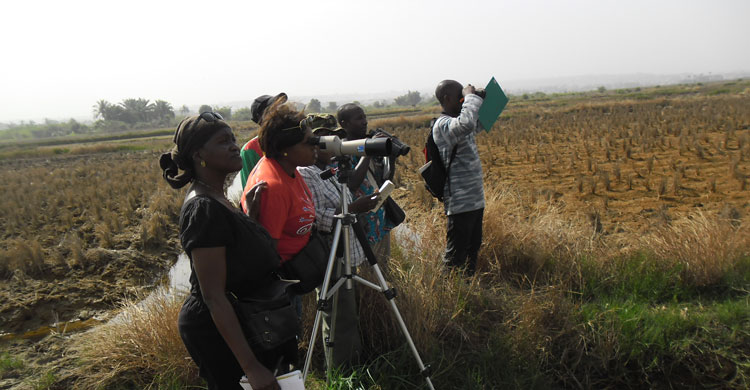 Workshop participants getting trained on the identification and monitoring of waterbirds

Bonn, 9 March 2017 - A waterbird conservation project in Guinea was successfully implemented by BirdLife International, in collaboration with the Government of Guinea and other national partners, in the framework of the AEWA Small Grants Fund (SGF).

The project, entitled “Strengthening National Capacity for sustainable conservation of Migratory Waterbirds in Guinea”, was funded under the 2013 cycle of the AEWA Small Grants Fund and implemented in the period 2014-2016. It contributed to the BirdLife/MAVA Foundation-funded Conservation of Migratory Birds Project (CMB). The project helped to develop a National Work Plan for the Implementation of the AEWA Plan of Action for Africa, as well as a National Multi-Species Action Plan for the Conservation of the Lesser Flamingo and the Black-crowned Crane in Guinea. The project also improved national capacity for waterbird monitoring and raised awareness on the importance of waterbird conservation.

The National AEWA Work Plan and National Species Action Plan were developed during a national multi-stakeholder workshop in December 2015 which brought together 15 participants from governmental and non-governmental organizations involved in waterbird and wetlands management. They included the national AEWA implementing agency Office Guinéen des Parcs et Réserves (OGUIPAR), National Services for the Environment and Forestry, the Abdel Gamal Nasser University with its affiliated CERE Environment Research Centre, the Rio Kapatez and Tristao Marine Protected Areas, as well as the Guinée Écologie conservation NGO.

During the three days of the workshop, the participants defined the objectives, activities, expected results and distribution of responsibilities of the national work plan for the implementation of AEWA in Guinea, and specifically the AEWA Plan of Action for Africa. They also developed the National Action Plan for the Conservation of the Lesser Flamingo and the Black-crowned Crane, two AEWA species of conservation priority in Western Africa. Major activities of the action plan focus on the protection of habitats, the designation of key sites, measures to increase public awareness and capacity-building for the conservation of the two species. A working group, coordinated by OGUIPAR, was set up to facilitate the implementation of the plan. The workshop participants were also trained on the identification and monitoring of waterbirds and Important Bird and Biodiversity Areas.

This AEWA SGF-funded projected also co-funded Guinea’s participation in the International Waterbird Census (IWC) in February 2015 and January 2016. With the help of at least 53 volunteers, counts were carried out at five sites in 2015 (Tristao Islands, Rio Kapatchez, Kankoure Delta, Kassa-Ile Blanche and Marigot de Taidy) and two sites in 2016 (Kankoure Delta and Kassa-Ile Blanche).

Also as part of the project, two major World Migratory Bird Day (WMBD) events took place in 2015 and 2016. They were coordinated by Guinée Écologie, in collaboration with OGUIPAR, and featured talks on species conservation, a conference and exhibition on migratory birds in Guinea and birdwatching outings. The 2016 WMBD event, attended by some high-level government representatives and broadcast by Guinean Radio and Television, was a good opportunity to call the attention of stakeholders to the outcomes of the AEWA Small Grants Fund project. Altogether, the World Migratory Bird Day events attracted more than 500 participants from various governmental and non-governmental sectors, especially young people.

The UNEP/AEWA Secretariat would like to commend the project implementation team and partners for the successful implementation of this project which will have a lasting positive impact on the conservation of migratory waterbirds and their habitats in Guinea.