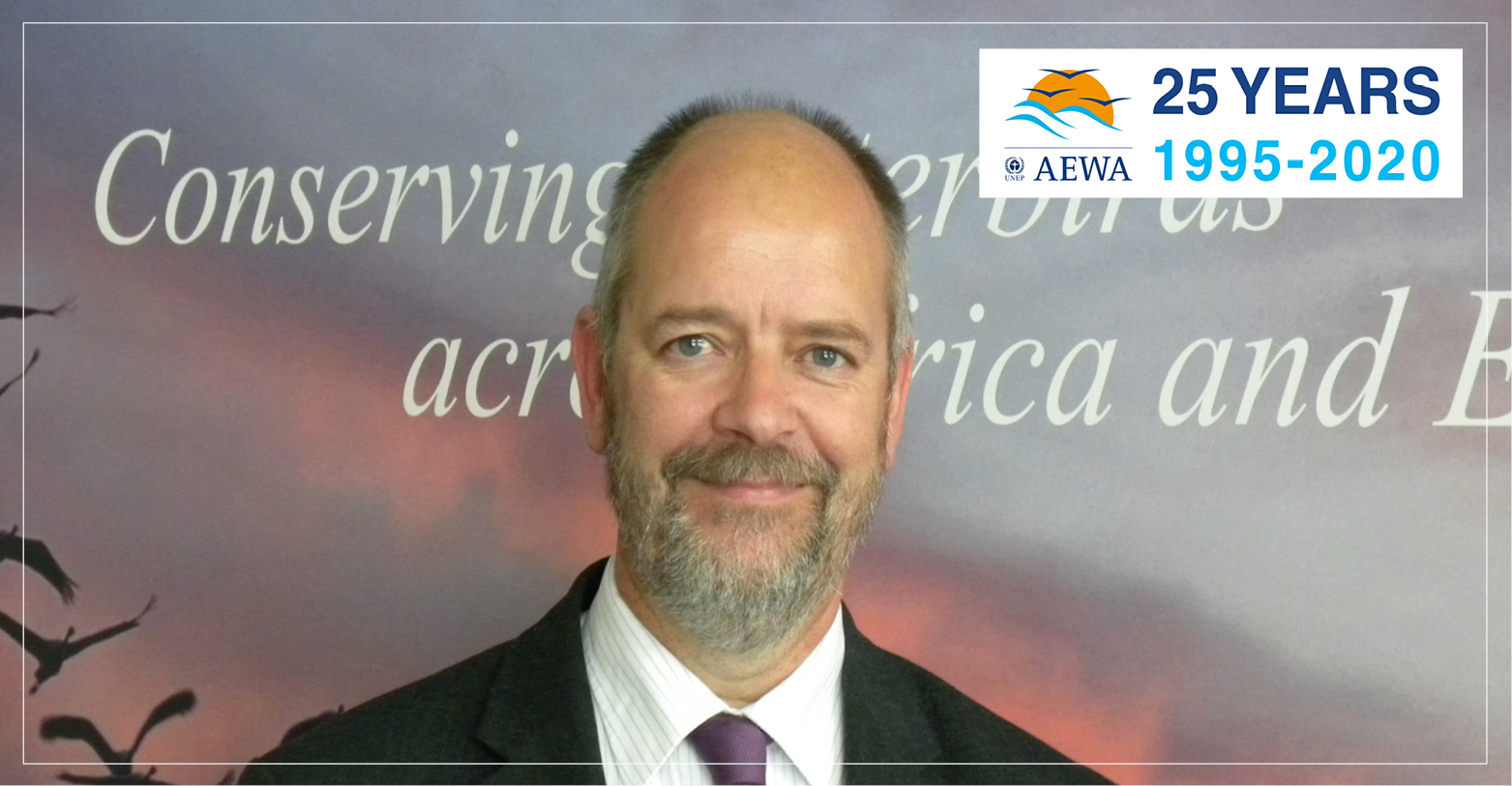 Celebrating this anniversary is a good time for reflection on what has been achieved since AEWA was concluded in 1995. Twenty-five years ago, I was working for the Ministry of Agriculture, Nature Management and Fisheries of the Netherlands and, to be honest, I was not even aware that a species treaty for migratory waterbirds had been developed by my own ministry. I was working at the regional level and probably did not receive information on this important event that took place in The Hague, the Netherlands. This situation completely changed within a few months when I was appointed as Executive Secretary of the AEWA Interim Secretariat at my ministry in The Hague.

From 1 January 1996 onwards, the main priority of the Secretariat was to promote AEWA and to recruit at least 14 Parties - seven from Africa and seven from Eurasia, as laid down in the text of the Agreement to enable AEWA to enter into force. The expectation was that this could be easily reached within three years following the successful conclusion of the negotiations in 1995. Unfortunately, this was not the case and by early 1999 only one African country had ratified. This would not have been a major issue, if we had not already agreed with the CMS Secretariat and the Governments of South Africa and the Netherlands to organize the 1st Meeting of the Parties of AEWA in Cape Town (MOP1), South Africa, from 6-9 November 1999. Without the 14 Parties needed, however, there would have been no legal basis for decisions at the MOP1. To avoid this, I paid visits to the authorities of six western and five southern African countries in early 1999, which all joined the Agreement within a few months and, AEWA entered into force just in time on 1 November 1999.

The second priority of the Secretariat was to bring the Agreement to life. Otherwise, AEWA would remain a well written treaty without any implementing activities. During the drafting of the Agreement text, consultations had taken place with all the main stakeholders. These stakeholders - Range States, IGOs, NGOs and experts - are of great importance for the implementation of the Agreement.  So, when at the beginning of 1996 some in the international hunting community raised concerns about the AEWA Secretariat being based at the ministry of a country that had just changed its hunting law and excluded all migratory waterbirds from hunting, I took this seriously. By making crystal clear that AEWA had its own policy with respect to hunting of waterbirds and with the support of the late Herby Kalchreuter (CIC) among others, we managed not only to keep this stakeholder on board, but also to develop a good working relationship.  Together with the hunting organizations, the Secretariat ran several AEWA workshops to promote the use on non-toxic shot for hunting of waterbirds in wetlands. Regrettably, so far not all AEWA Parties have banned the use of lead shot.

The Netherlands played an instrumental role in developing the Agreement - by providing the Interim Secretariat and hosting the 1st Meeting of the Parties in South Africa.  Over the years substantial support has been received from governments as well as from NGOs and experts and numerous projects have been executed. The ‘Wings of Wetlands' UNEP-GEF Flyways Project (WOW) was the largest international, flyway-scale wetland and waterbird conservation initiative in the African-Eurasian region, spanning over Africa, Europe, the Middle East, Central Asia, Greenland and the Canadian Archipelago. The 4-year project (2006-2010) was a partnership among many international conservation organizations and national governments and aimed to improve the understanding and the conservation of healthy and viable populations of African-Eurasian migratory waterbirds. It started off after a fundraising workshop organized by CMS in 1998 in Bonn. Over a beer, representatives of UNEP-GEF, Wetlands International and the CMS and AEWA Secretariats met to discuss how to raise more support for the implementation of AEWA. Wetlands International was then contracted by the AEWA Secretariat to develop a project outline. This outline was approved at MOP1 and finally led to the development and approval of a full-size GEF project of US$12 million, of which 50 per cent would be covered by GEF. The role of the Secretariat was to secure the remaining 50 per cent. That was a real challenge. Although we came a long way, we did not manage to secure the full amount of matching funds and had to cut down part of the original project proposal. I am very grateful for the constructive cooperation between all partners involved in this project and for all the support we have received to make this project a success. Without this support we would not have managed to implement this project, which was ranked among the top ten of the best GEF biodiversity projects.  Its main key outputs - the Flyway Training Kit and the Critical Site Network Tool - are still in place.

In 2005, for the first time, an outbreak of Avian Influenza (H5N1) occurred in Eastern Europe. At that time, it was not clear what the impact would be for human beings and it was feared that it could become a pandemic. Clearly, it was not only a serious health issue, but also a serious conservation one. As Executive Secretary, I was very concerned about the impact on our work, because birds were being called ‘messengers of death’.  This was the reason for me to initiate "World Migratory Bird Day", which was celebrated for the first time in 2006 and annually since then. It was my hope that by paying attention to the value of migratory birds, we could secure support for their conservation. Another issue of concern was that the information about the role of birds as a vector for spreading the disease was far from balanced. Taking into account that Avian Influenza was an issue of worldwide concern, I managed to convince CMS to establish the Avian Influenza Taskforce to ensure that information on the role of birds in transmitting Avian Influenza would be based on facts and not purely on fear. Looking back, both initiatives worked out very well. Luckily Avian Influenza did not evolve into a pandemic, but at least we are now more prepared for a similar situation in future.

AEWA is about flyway conservation. Over the years, several International Single and Multi-species Action and Management Plans have been developed. During Action Planning Workshops in this context, I noticed the great commitment of the participating experts, policy officers and NGOs and the willingness to work together for the benefit of the species.

Since AEWA was concluded in 1995, a great deal has been achieved due to support given by governments, IGOs, NGOs and experts. This has enabled the Secretariat to increase its number of staff and to do a large amount of work. Parties have noticed the important role the Secretariat is playing and appreciate the results of its work. I would like to take the opportunity to commend the staff of the AEWA Secretariat. The AEWA Secretariat team is doing its utmost to deliver what Parties are expecting; the team is composed of excellent and very motivated professionals who are highly committed to implement AEWA and the decisions taken by MOPs.

Twenty-five years after the conclusion of AEWA, the work is not done. Unfortunately, many species still do not have a favourable conservation status.  After I retired, I moved back to the Netherlands. It is well known that my country hosts the main breeding grounds for the Western European population of the Black-tailed Godwit. Within the Netherlands, the province where I have settled - Friesland - is a key area for this species, but the breeding success this and last year is extremely low - too low to ensure the survival of the species in the long run. It Is clear that current land-use is the main reason for this. Without a drastic change in agricultural use of grassland the future of the Black-tailed Godwit looks dire. Listening to the heated debates between farmers and politicians on reducing nitrogen emissions to protect Nature 2000 sites, I do not see that substantial agricultural change will take place in the near future. However, the good news is that on a small scale some farmers decided to move to organic farming and even to restore part of their land to make it more suitable habitat for waders. Also, dairies are promoting more and more planet-proof, wader friendly milk. So, consumers can decide to buy this kind of product and by doing so a small amount per litre is set aside to stimulate farmers to produce ecologically sound milk. That said, there is still a long way to go to bring the Black-tailed Godwit back to a favourable conservation status. Therefore, I would say that AEWA is even more needed than ever before.

As I wrote at the beginning of this article, I was not aware of AEWA in 1995. Being currently engaged in one of the largest nature conservation NGOs of the Netherlands, I noticed that the practitioners working for this organization have not heard of AEWA either. The same is the case for local authorities and other NGOs. In my view it is crucial for the implementation of the Agreement to reach out to this kind of target group. Of course, the ‘Happy Few’ attending the MOPs and other meetings organized by AEWA are well aware, but they might not always have the time or be in the position to communicate what has been decided. So for me this would be a priority for the years to come.

Due to the economic crisis there is less funding available to implement AEWA. Particularly the African Initiative could do with additional financial support. As we all know these developing countries are still rich in biodiversity but lack the means to fully implement the Agreement. Therefore, additional support to enable the AEWA Secretariat to help those countries in their implementation is really needed.

Of course, many other activities of great importance executed by the Secretariat are in need of more support. I really hope that AEWA will receive the support to go from strength to strength and that looking back in 25 years from now we can say ‘Yes, we managed to maintain and/ or restore all the species listed under AEWA and ensure they have favourable conservation status’. This would be a legacy for our children and grandchildren, a legacy of which we could be proud.