The winners of the 2008 AEWA Waterbird Conservation Award are…

Mr Mark Anderson in the Individual Category and OMPO (Oiseaux Migrateurs du Paléarctique Occidental) in the Institutional Category were the winners of the 2008 AEWA Waterbird Conservation Award. The award, which recognizes contributions to the conservation, research and monitoring of migratory waterbirds, as well as support to the development of the Agreement, was presented at the opening ceremony of the 4th Session of the Meeting of the Parties to AEWA on 15 September 2008 in Antananarivo, Madagascar.

Earlier this year the UNEP/AEWA Secretariat announced the call for nominations for the AEWA Award in institutional and individual categories. The nominees, all of them ardent activists in the field of waterbird conservation, were considered by the AEWA Standing Committee at its meeting on 24-25 June 2008.

The two winners were selected because of their particular activities and achievements, contributing to the development of the Agreement, the conservation of waterbird species and their habitats, the management of human activities, research and monitoring as well as education and information.

The AEWA Waterbird Conservation Award was established by the Standing Committee at its second meeting (November 2004, Bonn, Germany) and is presented triennially at each session of the Meeting of the Parties in order to recognize and honour institutions and individuals within the Agreement area for their significant contribution to the conservation and sustainable use of waterbirds.

In addition to receiving the Award, this year’s winners will also receive a free five-day access to the Selous Game Reserve in Tanzania, kindly offered to the winners by the Chair of the AEWA Standing Committee.

The winners of the 2008 AEWA Waterbird Conservation Award are: 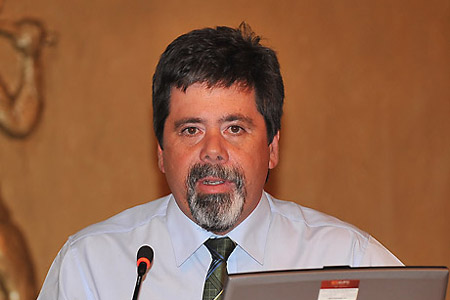 Mr Mark Anderson, the winner in the individual category, has had a long-standing involvement in nature conservation. Since 1991 he has been working as an ornithologist with the Department of Tourism, Environment and Conservation in the Northern Cape Province of South Africa. Mr Anderson has published more than 200 scientific and popular articles and has contributed to the chapters of several books. He is the editor of “Vulture News” and Associated Editor of “Ostrich”, a member of several nature conservation organizations and steering or advisory committees. He is a member of the IUCN-SSC/Wetlands International Flamingo Specialist Group and a trustee of the Flamingo Environmental Trust.

For more than 15 years he has been a driving force in the conservation of Kamfers Dam – the site supporting the largest permanent population of Lesser Flamingos in Southern Africa, and has been involved in the bi-annual monitoring of Lesser Flamingos at 65 wetlands in the Northern Cape Province. In addition to carrying out monthly counts at Kamfers Dam, he greatly contributed to the construction of a flamingo breeding island there in 2006. Today the site is one of the four breeding sites of the Lesser Flamingo in Africa and one of only five breeding sites worldwide. The first successful breeding event on the new island took place in early 2008, where approx. 9,000 chicks were hatched. It is hoped that the colony will breed regularly and that the island will continue to offer unique opportunities for research, education and public awareness activities.

OMPO (Oiseaux Migrateurs du Paléarctique Occidental), the winner in the institutional category, has played an important role in strengthening the AEWA network and increasing the number of Parties to the Agreement in the Baltic States and Northern Africa as well as strengthening AEWA’s links in Russia.

The organisation has been a strong supporter of scientific research in waterbird migration and conservation in African and Europe and has been collating and publishing scientific information on migratory waterbirds for many years. For example, OMPO has been an important supporter of the Russian Ringing Centre for over 15 years. Similarly, it has been instrumental in restoring operations of the Ventes Ragas bird ringing station in Lithuania. OMPO has been closely involved in the implementation of the Agreement nationally in France and internationally in Europe and Africa. In West Africa OMPO has been strongly involved in the restoration and management of the N’Diael wetland in Senegal.

The UNEP/AEWA Secretariat warmly congratulates the winners of the 2008 award and thanks both Mr. Anderson and OMPO for their major contributions to waterbird conservation in the AEWA region!

We would also like to thank all those involved in nominating candidates for this award, whose excellent achievements were acknowledged during the selection procedure. We would like to think that this award serves as an inspiration to all the many conservationists working together towards the protection of AEWA species.

Last updated on 24 April 2015
CMS Instrument:
AEWA
Related meetings:
4th Session of the Meeting of the Parties to AEWA