Mr David A. Stroud in the Individual Category and the Government of the Netherlands, represented by the Ministry of Agriculture, Nature and Food Quality (LNV) in the Institutional Category were the winners chosen to receive the AEWA Waterbird Conservation Award 2005, which was presented at the opening ceremony of the 3rd Session of the Meeting of the Parties on 23 October 2005 (Dakar, Senegal). The award is for their outstanding contributions to the development and implementation of the African-Eurasian Waterbird Agreement, as decided by the Standing Committee at its meeting on 4-5 July 2005. In addition, Dr Gerard C. Boere was declared Honorary Patron of AEWA for his crucial role in the process of drafting and negotiating the Agreement.

Earlier this year the UNEP/AEWA Secretariat had announced the call for nominations for the AEWA Award in institutional and individual categories. The nominees were then considered in the light of their activities and achievements that had contributed to the development of the Agreement, the conservation of species, the conservation of their habitats, the management of human activities, research and monitoring as well as education and information.

The AEWA Waterbird Conservation Award was established by the Standing Committee at its second session (November 2004, Bonn, Germany) to mark the 10th Anniversary of AEWA and will be presented triennially at each session of the Meeting of the Parties in order to recognize and honour institutions and individuals within the Agreement area that have contributed significantly to the conservation and sustainable use of waterbirds. 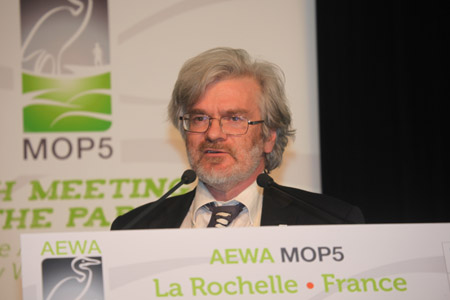 Mr David Stroud, the winner in the individual category, has had a long career in the field of wetland and waterbird conservation. His special scientific interest in the Greenland White-fronted Goose has significantly contributed to the understanding of the life cycle of this species. With his numerous publications on wetland and waterbird conservation within the United Kingdom and internationally, he has created public awareness on a wide range of conservation issues. Playing a major role in many national and international bodies involved in wetland and waterbird conservation such as the Executive Committee of the International Wader Study Group, IWRB (now Wetlands International), Ramsar and the Bonn Convention, he has facilitated resources (including substantial financial resources) worldwide for the conservation and management of wetlands and waterbirds. He has been involved in the development of AEWA from the beginning, supporting its development and implementation with important and substantial contributions for example to the Action Plan and species listings, and has been untiringly active in his role as observer to the Technical Committee during the last ten years.

The Government of the Netherlands, the winner in the institutional category, played a major role in the establishment of AEWA and has since then strongly supported the Agreement, not least financially. By promoting the flyway approach of AEWA both at a national and international level, and supporting partner organizations of AEWA such as BirdLife International, Wetlands International and IUCN, the Government of the Netherlands significantly contributes to the implementation of AEWA. Moreover, it funds waterbird conservation abroad through programmes such as Matra and PIN-Matra, has fully implemented the EU Birds and Habitats Directive and promotes the concept of PEEN (Pan-European Ecological Network) that is contributing to biodiversity conservation. 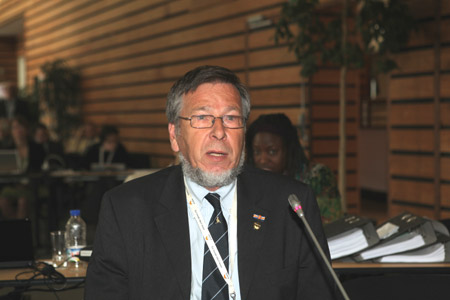 Dr Gerard Boere has had a major influence on the development of international structures for migratory conservation during the last three decades, initially through his personal research on migratory waders in the Dutch Wadden Sea. He has been very active in guiding and promoting non-governmental conservation and research organizations and also strongly involved in several international biodiversity treaties such as Ramsar, CMS, the Bern Convention and the Conservation of Arctic Flora and Fauna (CAFF). Through his work for the Dutch government, he promoted bilateral cooperation on waterbird and wetland conservation with Russia and Ukraine. Dr Boere was the driving force in establishing AEWA. Throughout the many years of preparatory work he developed and promoted what would eventually become the Agreement, and played a crucial role in drafting the text. It is for this outstanding contribution that Dr Boere is being declared Honorary Patron of AEWA.

The AEWA Secretariat thanks Mr Stroud, Dr Boere and the Government of the Netherlands for their major contributions to the work and success of AEWA, and congratulates the winners!

Last updated on 16 April 2014
CMS Instrument:
AEWA
Related meetings:
3rd Session of the Meeting of the Parties to AEWA