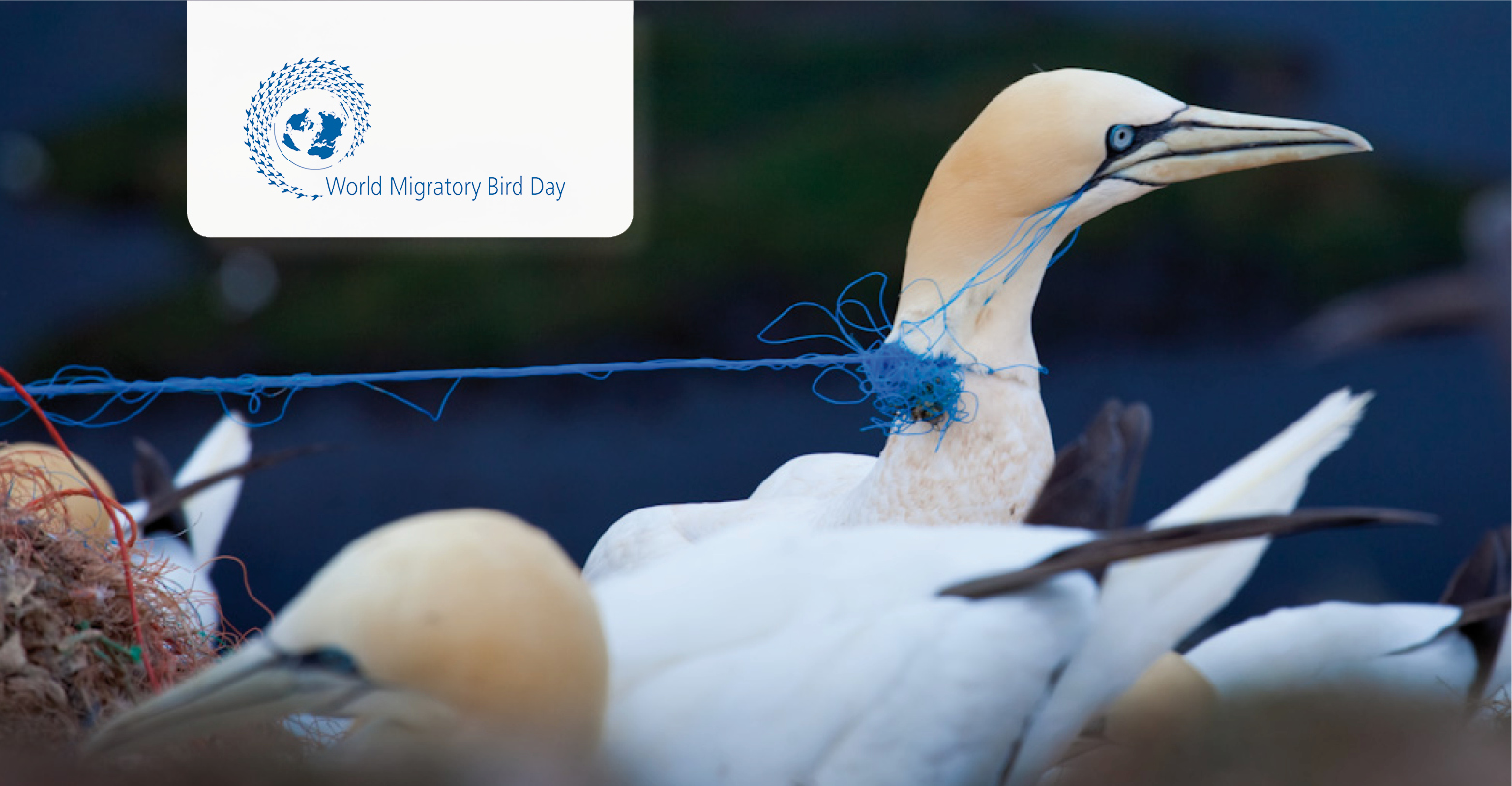 On World Migratory Bird Day, celebrated on 11 May, two UN wildlife treaties and conservationists around the world are calling for urgent action to stop plastic pollution by highlighting its negative effects on seabirds and other migratory birds.

“One third of global plastic production is non-recyclable and at least eight million tonnes of plastic flows unabated into our oceans and water bodies each year,” Joyce Msuya, Acting Executive Director of UN Environment said. “It is ending up in the stomachs of birds, fish, whales, and in our soil and water. The world is choking on plastic and so too are our birds on which so much life on earth depends.”

Plastic pollution presents a three-fold threat to birds: entanglement in fishing gear and other plastic litter is the most visible but affects fewer individuals.

Ingestion of plastic waste is more pervasive and can affect large proportions of some species. Birds mistake plastic as food causing them to starve to death as their stomachs fill up with undigestable plastic.

Plastic is also being used as nest material. Many birds pick up plastic to line their nests mistaking it for leaves, twigs and other natural items, which can injure and trap fragile chicks.

Discarded fishing gear is responsible for most entanglements among birds at sea, in rivers, lakes and even on land. Seabirds are particularly threatened by fishing gear. Many entangled seabirds are not detected because they die far from land out of sight of humans.

“Becoming entangled in fishing gear or plastic litter condemns birds to a slow, agonizing death” says Peter Ryan, Director of the Fitzpatrick Institute of African Ornithology at the University of Cape Town.

To capture additional data on remote entanglements, scientists such as Peter Ryan have turned to Google Images and other web-based sources to provide a more comprehensive picture of the threat, and the numbers of affected bird species have been adjusted upwards.

Of 265 bird species recorded entangled in plastic litter, at least 147 species were seabirds (36 per cent of all seabird species), 69 species freshwater birds (10 per cent) and 49 landbird species (0.5 per cent). These figures show that almost all marine and freshwater birds are at risk of entanglement in plastic waste and other synthetic materials. A wide diversity of landbirds from eagles to small finches are also affected, and these numbers are bound to increase.

Research further shows that about 40 per cent of seabirds contain ingested plastic. Marine ducks, divers, penguins, albatrosses, petrels, grebes, pelicans, gannets and boobies, gulls, terns, auks as well as tropicbirds are particularly at risk. Ingesting plastic can kill them or more likely cause severe injuries, and plastic accumulations can block or damage the digestive tract or give the animal a false sense of satiation, leading to malnutrition and starvation.

Chemical additives from plastic were found in birds’ eggs in remote environments such as the Canadian Arctic.

To address the issue of plastic pollution – and ensure that in the future fewer birds will die by ingestion of or getting entangled in plastic – UN Environment launched the Clean Seas campaign in February 2017. The campaign, which targets marine plastic pollution in particular, has an upstream focus and asks individuals, governments and business to take concrete steps to reduce their own plastic footprints.

The Convention on Migratory Species and the African Eurasian Waterbird Agreement work with countries to prevent plastic items from entering the marine environment. A recent resolution on seabird conservation adopted by AEWA countries in December 2018, includes a series of actions countries can take to reduce the risk caused by plastic waste on migratory birds.

At the Conference of the Parties to the Convention on Migratory Species in 2017, countries also agreed to address the issue of lost fishing gear, by following the strategies set out under the Food and Agriculture Organization’s Code of Conduct for Responsible Fisheries.

Efforts to phase out single use plastics and to redesign plastic products to make them easier to recycle are underway in many countries.

“There are no easy solutions to the plastic problem. It will require the joint efforts of governments, industry, municipalities, manufacturers and consumers to tackle the problem. However, as this year’s World Migratory Bird Day underlines – everybody on this planet can be part of the solution and take steps to reduce their use of single-use plastic.  Tackling this problem globally will not only be beneficial for us, but also benefit our planet’s wildlife, including millions of migratory birds,” said Jacques Trouvilliez, Executive Secretary of the African Eurasian Waterbird Agreement.

Plastic pollution is a serious and growing threat to migratory birds,  which will only further limit their ability to deal with the much larger threat faced by climate change.

World Migratory Bird Day is celebrated each year to highlight the need for the conservation of migratory birds and their habitats. More than 300 registered events in more than 60 countries to mark World Migratory Bird Day 2019 will include bird festivals, education programmes, media events, bird watching trips, presentations, film screenings and a benefit concert to raise funds for international nature conservation.

The Convention on Migratory Species (CMS) and the African-Eurasian Migratory Waterbird Agreement (AEWA) — two intergovernmental wildlife treaties administered by UN Environment — organize the campaign in cooperation with Environment for the Americas (EFTA).

About the Convention on Migratory Species (CMS)

The Convention on the Conservation of Migratory Species of Wild Animals aims to conserve terrestrial, aquatic and avian migratory species throughout their range. It is an intergovernmental treaty, concluded under the aegis of UN Environment, concerned with the conservation of wildlife and habitats on a global scale. Since the Convention's entry into force in 1979, its membership has grown steadily to include 127 Parties from Africa, Central and South America, Asia, Europe and Oceania.

The Agreement on the Conservation of African-Eurasian Migratory Waterbirds (AEWA) is an intergovernmental treaty dedicated to the conservation of migratory waterbirds that migrate along the African-Eurasian Flyway. The Agreement covers 255 species of bird ecologically dependent on wetlands for at least part of their annual cycle. The treaty covers 119 range States from Europe, parts of Asia and Canada, the Middle East and Africa. As of 1 March 2019, 78 countries and the European Union have become a Contracting Party to the agreement.
www.unep-aewa.org  @UNEP_AEWA