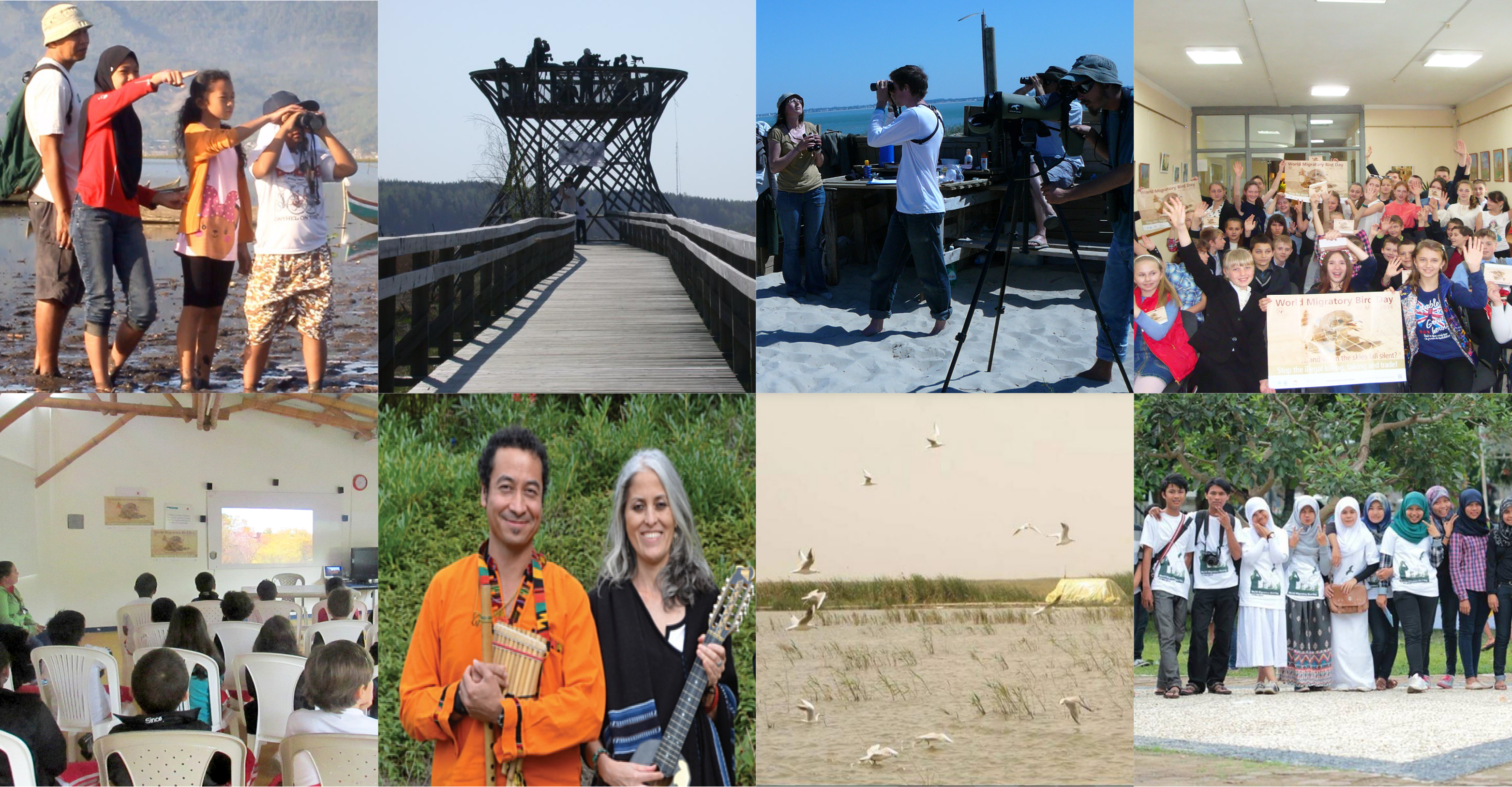 Bonn, 10 June 2016 - Every year more than 25 million migratory birds are illegally killed or taken across the Mediterranean. They are shot or caught with nets and other indiscriminate traps. With the slogan “… and when the skies fall silent? Stop the illegal killing, taking and trade!”, World Migratory Bird Day 2016 highlighted the incredible numbers of migratory birds being lost each year as a result of these activities.

On and around 10 May 2016, dedicated organizations, governments and people all over the world helped raise awareness on this problem by running educational programmes, lectures, bird walks, visits to bird-watching sites, art exhibitions and other public events which were registered on the World Migratory Bird Day (WMBD) website. The outcome is astonishing: more than 300 registered events in 85 countries! These figures show an increase by 50% in the number of registered events and an increase by more than 20% in terms of countries involved compared with last year. There are 10 countries that have organized WMBD events every year since the first World Migratory Bird Day in 2006: Argentina, Canada, Colombia, France, India, Indonesia, Kenya, Israel, South Africa and USA. Moreover, this year four new countries joined the World Migratory Bird Day celebration by organizing and registering awareness-raising events: Bhutan, Democratic People's Republic of Korea, Mauritius and Myanmar.

Among the 312 registered events we saw for instance an event organized by Dubai Municipality’s Environment Department targeting different audiences: a seminar for environmental professionals and stakeholders, a social media photo contest for the general public and awareness-raising activities at the malls in Dubai for people from all walks of life. While in the United Republic of Tanzania, the University of Dar es Salaam, in particular the Department of Zoology and Wildlife Conservation, jointly with the Bird Environment and Community (BECO) Foundation and the Ministry of Natural Resources and Tourism, hosted the celebration of World Migratory Bird Day with a birdwatching tour. This was followed by a tour of the museum in the Department of Zoology and Wildlife Conservation for primary school pupils and a workshop for the other participants – all largely covered by various media.

For the fourth consecutive year, the operatic choir Lirica San Rocco from Bologna, Italy gave a benefit concert in Bonn, the programme of which contained ten arias from famous works by leading composers, including Verdi’s Aida, Delibes’ Lakmé and Puccini’s Madama Butterfly.  Fernando Spina, the Chair of Scientific Council of the Convention of Migratory Species, is one of the choir’s tenors.

For World Migratory Bird Day 2016, several key supporters and partners from around the world provided statements on the value of migratory bird conservation and the 2016 theme, including UN Secretary-General Mr. Ban Ki-moon.

With this year’s theme, the campaign was also the opportunity to launch the Intergovernmental Task Force on Illegal Killing, Taking and Trade of Migratory Birds in the Mediterranean (MIKT). The Task Force has been created under CMS to facilitate international cooperation and will convene for the first time from 12 to 15 July 2016 in Cairo, Egypt.

The competition for the official trailer for the 2016 World Migratory Bird Day saw Gorontalo region in Indonesia as the location featured in the winning entry, which was shot by Iwan Hunowu using a drone for capturing the wide view of the landscape and a camera for capturing the birds. Interestingly, this area also hosted a WMBD event, including several educational activities aimed at raising awareness on this year’s theme.

2016 also marks the 10th anniversary of the global WMBD campaign. Since 2006, more than 2,300 events have been registered in 139 different countries and territories worldwide. Everywhere, people and organizations have run suites of WMBD theme-related educational activities such as exhibitions, birding tours and lectures in order to highlight the importance of the conservation of migratory birds and their habitats. 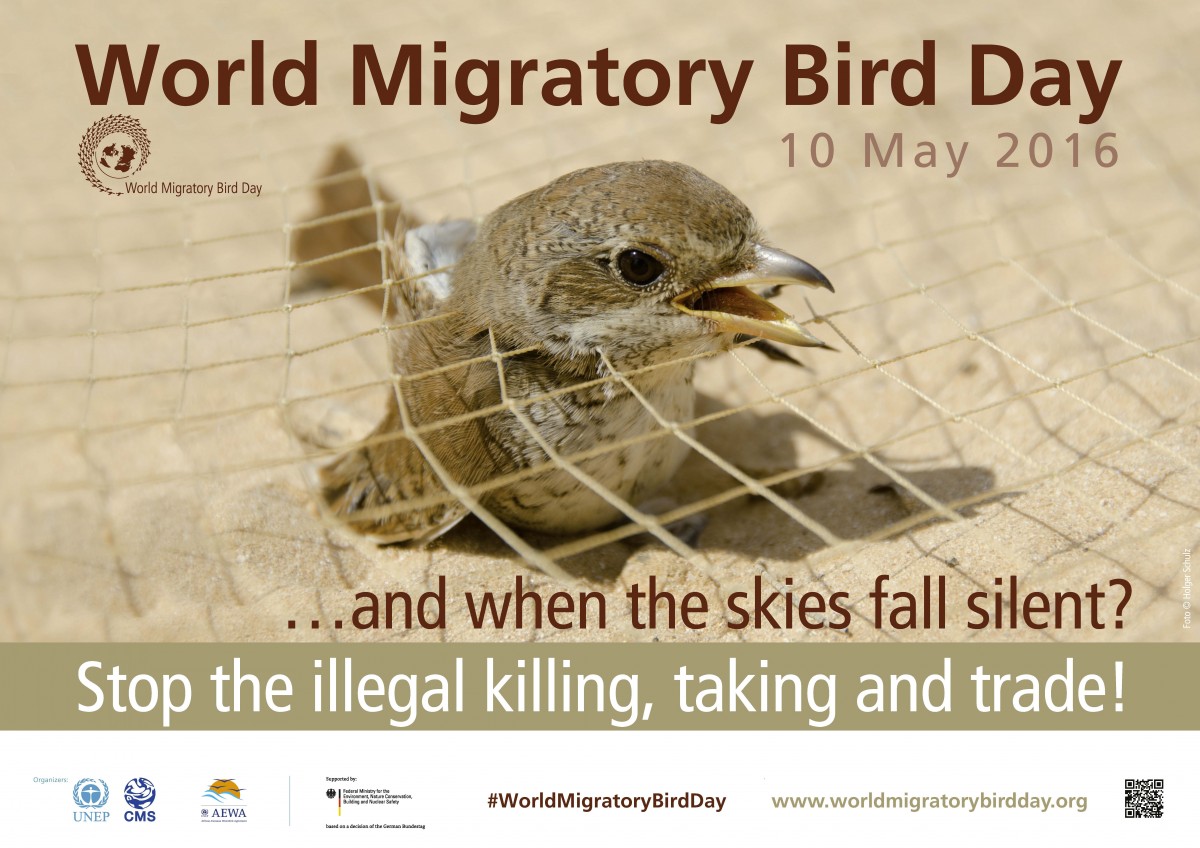 The AEWA Plan of Action for Africa foresees the provision of seed funding to support the annual celebration of WMBD in Africa. Thanks to a voluntary contribution from the German Federal Ministry for the Environment, Nature Conservation, Building and Nuclear Safety (BMUB) provided through the UNEP/AEWA Secretariat, a number of African Contracting Parties received support for the organization of national and transboundary events for the 2016 WMBD celebration. The events have been organized with the help of the Birdlife Africa Partnership Secretariat. Around 40 proposals were received from both national governmental agencies and non-governmental organizations. Nine national events and two transboundary activities were selected and supported. The events took place in Northern Africa (Tunisia and Sudan), Western Africa (Niger, Mauritania, Senegal, Togo, Benin and Ghana), Eastern Africa (Rwanda, Tanzania, Kenya, Uganda, and Ethiopia) and Southern Africa (Zimbabwe).

World Migratory Bird Day 2016 has also been a record breaking campaign when it comes to social media and web outreach. A well-defined strategy using both Facebook and Twitter has generated a far greater impact than previous year campaigns. For instance the use and promotion of the official hashtag #WorldMigratoryBirdDay by thousands of accounts in twitter, especially important ones such as the official United Nations Account (@UN) or of the World Wildlife Fund (@WWF) have helped generate more than 58 million tweet impressions and reached more than 18 million users. Even though less than twitter, Facebook also has had its own share in awareness raising with more than 210 thousand users reached. Furthermore, the official website has received more than 55 thousand page views from 181 countries, of which the top ones are India, USA, Germany, Indonesia and the UK. Amongst highlights of this year, one can single out a massive UN official website and social media accounts involvement in the campaign with 3 specifically WMBD-related tweets to their 7+ million followers and 10% of the overall wmbd website traffic being driven by a featured article on un.org.

Last but not least, WMBD also generated a lot of media interest around the world. Please have a look at our press clippings for the 2016 World Migratory Bird Day.

World Migratory Bird Day was initiated in 2006 by the Secretariats of the Convention on the Conservation of Migratory Species of Wild Animals (CMS) and the African-Eurasian Migratory Waterbird Agreement (AEWA). This is an annual awareness-raising campaign highlighting the need for the conservation of migratory birds and their habitats. Each year, on and around 10 May, people around the world take action and organize public events such as bird festivals, education programmes, exhibitions and bird-watching excursions to celebrate WMBD. Find out more on the WMBD website.