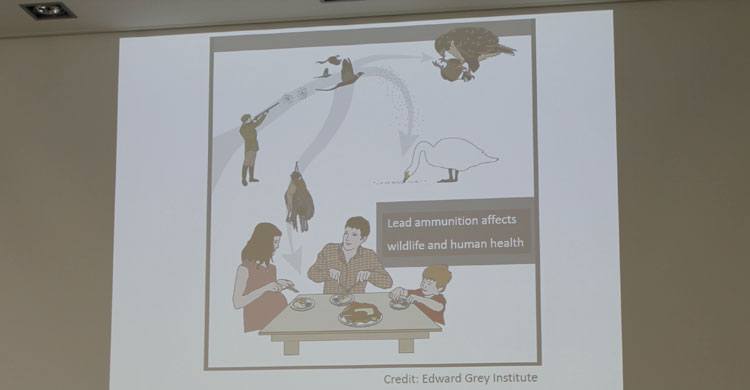 Bonn, 13 November 2015 - Lead ammunitions are responsible for poisoning and their use by hunters has been banned. Even if it is no longer subject of discussions as a result of scientific evidence, the implementation of this decision taken 1995 by AEWA Parties is still outstanding. Only a third of the countries that are Party to AEWA have prohibited lead ammunition over the last 15 years. And where legal measures are taken, enforcement often remains a problem. How to overcome this dilemma was the focus of a side event held in the margins of AEWA MOP6 and organized by WWT (the Wildfowl & Wetlands Trust), CMS (the Convention on Migratory Species), and BirdLife International. It was an opportunity to explore the practical, political and sociological steps to enable the transition to lead-free ammunition by working with the various stakeholders involved. AEWA should have a role to play in addressing the issue, which could be done by establishing a Task Force within the CMS Poisoning Working Group.

Sergey Dereliev, Technical Officer of AEWA, drew attention to CMS Resolution 11.15, which recognizes the wider risks of lead ammunition to raptors and waterbirds feeding in terrestrial environments, and that partial restrictions can be ineffective. By 2017, countries should phase out the use of lead ammunition in both wetlands and terrestrial environments. To achieve that objective, he saw a strong need to raise awareness but also of better analysis and understanding of the circumstances in the different countries.

Prof. Jesper Madsen, from the Aarhrus University in Denmark and Head of the Waterbird Harvest Specialist Group of Wetlands International, related the success story of the ban in his country, while Mr. Cy Griffin from the Federation of Associations for Hunting and Conservation of the EU (FACE) insisted on the fact that a better implementation of the lead ban in other countries implied a change in the way it is communicated. We do not only face a problem of compliance, “it is also a real problem of understanding amongst hunters of the different kinds of lead shot for instance”, he said. Mr Jean-Yves Mondain-Monval, ONCFS (French National agency for hunting and wildlife), explained in turn that even though it had been decided in 1993 that lead shot should be prohibited in France by 2006, and accompanying measures had been taken, hunters had not been briefed sufficiently, and thus the ban is hardly being respected. The low level of fines for non-compliance and the high price of alternative shots can further explain the difficulties encountered when trying to enforce the ban.

To Ruth Cromie from WWT UK, this is a “One Health” issue and there is no need to ask for further evidence: however, the situation in the UK confirms that it is to a large extent a question of convincing the hunters as they do not think that lead shot is a problem - “To them it is an invisible issue”, she declared. “They don’t like the alternatives, they don’t fear getting caught when breaking the rules, and the power of tradition is a real obstacle as well. But the work is not only to be done on the ground: lobbying and economic interests underlying hunting are key and the lack of implementation at that level needs to be addressed”, she added.

The work towards better implementation has to be undertaken at different levels. The sociological aspect is to persuade the hunters in the field but also at a higher level. There is also the political dimension, which is contracting new parties. In addition, communication needs to be improved.  The creation of a Task Force might be a good solution to take into account the various aspects of the issue.

Mr Bert Lenten, CMS Deputy Executive Secretary, insisted that the work needs to start very soon, but resources were still lacking. He suggested approaching manufacturers of weapons and ammunition, making them aware that lead shot is not sustainable as it causes more side effects and thus leaves fewer birds to be shot. The urgently needed dialogue between hunters and manufacturers should be supported as a potential solution to the crucial funding issue in an attempt to tackle the problem of lead shot.