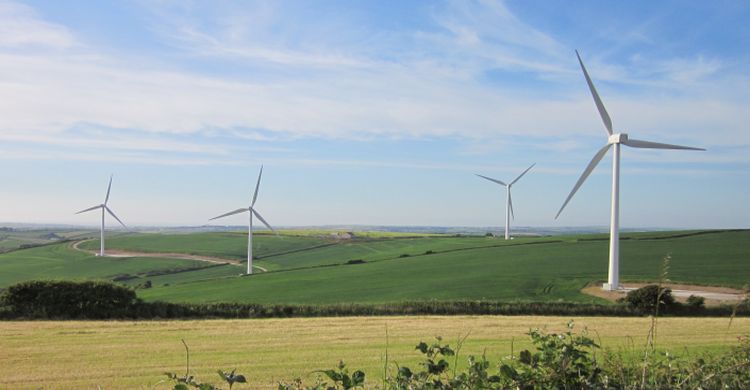 Bonn, 25 October 2014  - The United Nations Framework Convention on Climate Change has set a target of reducing emissions of greenhouse gases such as CO2. One way countries can meet their obligations is to switch energy production from the burning of fossil fuels to “renewables”, generally understood to include wind, wave, tidal, hydro, solar and geothermal power and biomass.

They have a dual advantage: first, they do not create by-products responsible for global warming and climate change; and secondly, they are non-consumptive, drawing on primary energy sources that are to all intents and purposes inexhaustible.

Why then is the Convention on the Conservation of Migratory Species of Wild Animals (CMS), which is holding its triennial policy conference next month in Quito, Ecuador, rocking the boat by publishing a review highlighting the serious environmental threats posed by the new technologies?

First and foremost, CMS is not joining the climate sceptics’ camp. There is ample evidence of the effects climate change is having on migratory animals.

The Convention has long been grappling with this issue. The Convention and the vulnerable species it protects need climate change to be halted or at least slowed down so that adaptation measures can be developed.

Climate change just adds to the threats migratory species currently face. This includes threats posed by the fishing gear responsible for by-catch of seabirds, turtles and dolphins; and the demand for luxury products that result in the wasteful practice of shark finning and the fuelling of the massacre of elephants and rhinos for ivory and horn. And then there is marine debris, bird poisoning and illegal trapping – the list goes on.

Climate change is opening several new fronts in the conservation war by causing habitat change and loss; by affecting gender ratios in species such as marine turtles; and by altering species’ behaviour with some not migrating at all, others leaving their breeding grounds later and returning earlier, while some are extending their range displacing other species less capable of adapting.

So why is CMS not rejoicing at the news that wave energy installations, tidal barrages, solar panels and wind farms on land and at sea are being developed at unprecedented rates? CMS would give a hearty cheer if these new technologies reduce as promised the human-induced drivers of climate change.

However, the report commissioned by the Convention, together with the African-Eurasian Waterbird Agreement, the International Renewable Energy Agency and BirdLife International, explains the prudent reaction from conservationists, as it illustrates how renewable energies are a double-edged sword – a cure for some ills afflicting the world but with potentially severe side-effects for wildlife.

Hydro-power relies on dams – technological wonders in many cases – but essentially barriers across rivers preventing migratory species such as salmon from reaching their spawning grounds. The changes to water flow and levels both up and downstream of the dams can drastically transform habitats. The human inhabitants displaced when their homes were flooded were given ample warning and compensation; not so the wildlife.

Wind power is harnessed through turbines, which take a huge toll of wildlife through collisions. The rotor blades of wind turbines are responsible for the deaths of hundreds of thousands of bats and birds a year, to the detriment of the ecological services these useful insectivores provide by devouring as many as 1,000 mosquitoes a night, reducing the need to use chemical pesticides.

The construction, operation and maintenance of turbines are also negative factors, especially in marine wind farms – noise whirring of the rotors can all disturb whale and dolphin species which are particularly sensitive to sound.

Biomass production leads to habitat loss and degradation affecting birds and terrestrial mammals. Large plantations lead to monocultures and a loss of habitat diversity and thus reduce the number of species that a given area can support.

Solar, wave and tidal power similarly have their drawbacks, but the guidelines accompanying the report point the way to constructing renewable energy installations in ways that eliminate or at least reduce their impacts on migrating mammals such as birds, dolphins, porpoises and fish and their habitats.

There is no silver bullet to deliver a perfect solution to the problems of our growing demand for energy and of producing it in ways that do not damage the environment in one form or another. Renewables provide many of the answers but they need to be deployed sensitively and not indiscriminately, so that our efforts to keep the atmosphere clean and planet cool do not come at a price that our wildlife cannot afford to pay.