20 Years of Flyway Conservation in Action 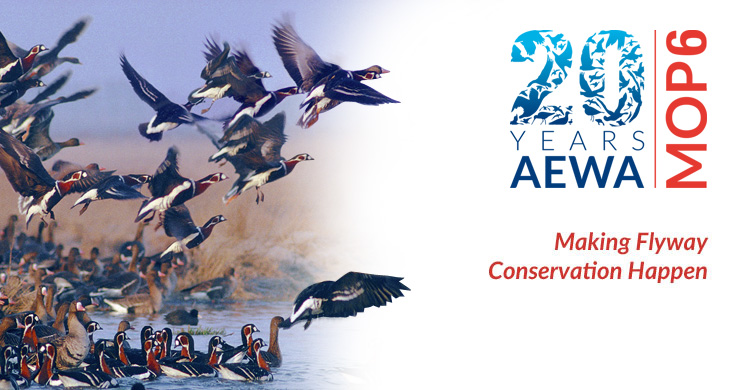 Bonn, 16 January 2015 – This year marks the 20th anniversary of the successful conclusion of the negotiation of the African-Eurasian Migratory Waterbird Agreement (AEWA) in The Hague, the Netherlands in June 1995.

Over the past twenty years AEWA has provided the framework for international cooperation on the conservation and management of migratory waterbird populations across the African-Eurasian Flyway.  It has also served as an example for flyway cooperation around the world, proving itself to be an effective motor for collaborative conservation efforts for migratory waterbirds.

AEWA entered to force on 1 November 1999 after the requisite number of Parties – seven from both Eurasia and Africa had ratified – and the first meeting of the Parties took place just a week later at Somerset West, near Cape Town, South Africa. The original idea for a structured agreement was first aired by the IUCN as early as 1983.  The first Conference of the Parties of the Convention on Migratory Species (CMS) identified the White stork (Ciconia c. ciconia) and western Palaearctic anatidae (ducks, geese and swans) as priorities for independent international instruments – these two later merged into a proposal for a single agreement covering a wider range of waterbirds in the African-Eurasian region, which is how AEWA evolved and led to a growing CMS Family.

To mark the 20th anniversary, tribute will be paid to various key players in the form of a rolling “people behind the Agreement” feature on the AEWA website. In this way, the work and dedication of the many government officials, NGO representatives, experts, consultants and stakeholders as well as project staff will be put in the limelight. Without the efforts of people such as these, AEWA would not be able to function and deliver.

Not only is 2015 the 20th anniversary of the signing of AEWA, but it will also see the 6th Meeting of the Parties, which will be held in Bonn – the host city of the Secretariat of the Agreement and those of the parent Convention and two fellow daughter Agreements. A new “20th Anniversary and MOP6” logo has been designed combining elements representing both events. This will be the second occasion that Bonn has been the venue of the Meeting of Parties of AEWA, the previous occasion being MOP2 in 2002, and the slogan chosen is “Making flyway conservation happen”, underlining the effectiveness of the concept of flyways for waterbird conservation. And the story will continue…

Another highlight of the year, will be World Migratory Bird Day (WMBD), which will be celebrated for the 10th time on 9-10 May 2015. WMBD, initiated by AEWA in 2006, has grown in scope and popularity to become one of the primary awareness-raising campaigns for migratory birds around the world each year. The campaign is organized by AEWA together with CMS. The theme for 2015 will be “Energy – make it bird-friendly!” and the campaign will be used to highlight the international guidelines developed by the two international organizations on reducing the negative impact energy developments can have on migratory birds, from power line collision to electrocution.